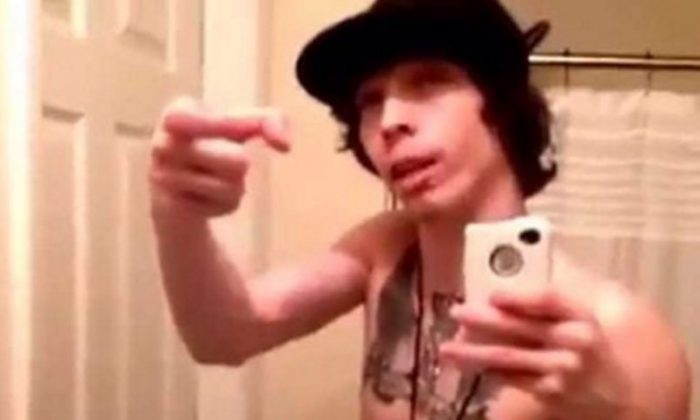 Bryan Silva, a 25-year-old man well-known on social media for making gun noises, was arrested after a standoff with police in Charlottesville, Virginia.

Silva was arrested and charged with abduction and possession of a firearm by a convicted felon, Newsplex.com reported. Charlottesville Police Chief Tim Longo said Silva surrendered to authorities after police used a chemical irritant in the home that he had barricaded himself in.

Silva has hundreds of thousands of fans on Vine and more than 1.5 million on Facebook, and he posts videos of himself making “gratata” noises to sound like a gun. He’s since been turned into a sort of viral meme. After he was arrested, a number of Twitter users were sharing photos and memes of him.

Police responded to a call from a neighbor at around 6 a.m. Sunday morning.

A 17-year-old girl went to a neighbor’s house to say that she had been held against her will by her boyfriend and that he threatened her with a handgun. She also told police he threatened to shoot police.

According to NBC 29, police said Silva refused to come out of the house when officers arrived with warrants. Police then dispatched their negotiation teams, and streets were blocked off near the home.

Some neighbors were told to shelter in place.

“I always thought that house was always kind of a little bit sketchy and we’ve seen cops there before we’ve seen things go on there,” said Leslie Tanner, a neighbor.

Silva apparently was posting his encounter with police on Facebook, including one showing Charlottesville police surrounding his home. He also posted a message, saying that “she betrayed me” and described three snipers in the bushes.

Before the standoff ended, Silva posted a video of him dancing around and drinking what appeared to be vodka.

When he surrendered, Silva appeared to have his pants down, showing his underwear, and his hands in the air.

According to Newsplex, Silva’s mother was “devastated by the news” of his arrest.