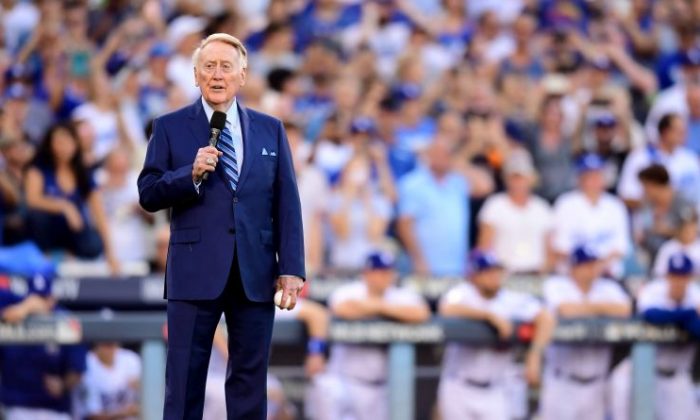 Vin Scully: ‘I Will Never Watch Another NFL Game’

Vin Scully, the longtime announcer for the Los Angeles Dodgers, said he’ll never watch another NFL game again due to players protesting during the national anthem.

“I have only one personal thought, really. … and I am so disappointed. I used to love, during the fall and winter, to watch the NFL on Sunday,” Scully said at an event in Pasadena, California, on Saturday, which was captured on video.

Scully spent one year in the U.S. Navy. “I have overwhelming respect and admiration for anyone who puts on a uniform and goes to war. So the only thing I can do in my little way is not to preach. I will never watch another NFL game,” he said.

A number of players across the league have continued to protest during the anthem, often taking a knee, sitting, or raising a fist in the air. They say it’s to protest against police brutality and racial inequality in the United States.

This Sunday, about five players protested during the playing of “The Star-Spangled Banner” before games, The Associated Press reported. Philadelphia Eagles safeties Malcolm Jenkins and Rodney McLeod raised their fists during the anthem, and Tennessee Titans wide receiver Rishard Matthews “stayed off the field,” AP said.

About 12 New Orleans Saints players took a knee before the anthem, as AP noted, but they stood once an announcer asked everyone to rise.

Last week, nearly the entire Houston Texans team took a knee for the anthem after Texans owner Bob McNair said, “We can’t have the inmates running the prison,” during a recent meeting with league executives and owners, Reuters reported.

According to the Seattle Times, nine of the Texans stood for the anthem, but the rest were kneeling or seated. The New York Times said about 40 players in all refused to stand. It marked the first time that the Texans as a team knelt in protest during the national anthem, the Houston Chronicle reported.