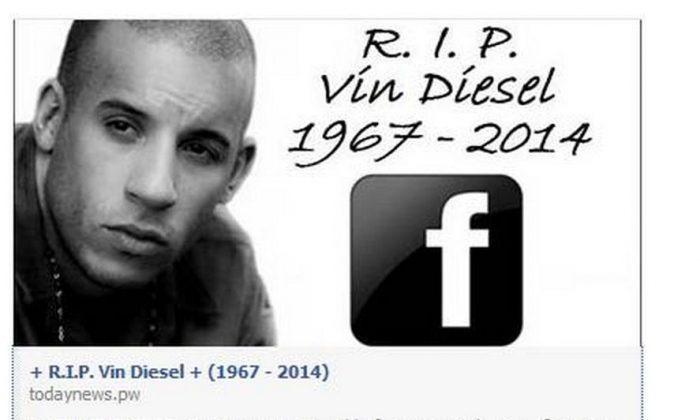 Vin Diesel has not died, but a viral post on Facebook says otherwise and could spread malware.

There’s no video, and when one clicks on the post, it asks the user to share it, which then spreads it even more.

There have been no legitimate news reports saying the “Fast & Furious” and “Riddick” actor died.

On Facebook, Diesel posted an image at around 4 p.m. ET on Monday. “Life is Beautiful…,” he wrote.

Several weeks ago, Diesel said that he and other actors in “Fast & Furious 7” met to discuss the future of the franchise after star Paul Walker died in November.

“We always took pride in trying to make each one better than the last,” Diesel wrote on his Facebook page at the time. “P.s. Tomorrow we meet with the studio, regarding the future of the Fast saga … and the completion of seven,” he added.