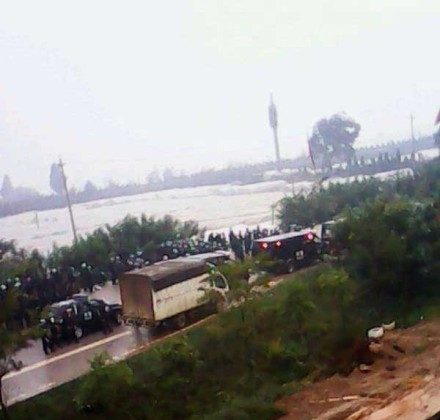 Over 1,000 villagers in China's Yunnan Province clashed with police on Oct. 22. (Weibo.com)
China

Over 1,000 villagers in southwest China’s Yunnan Province clashed with police on Oct. 22, smashing more than 30 police vehicles in ongoing protests over land seizures by local authorities.

Villagers smashed more than 30 police vehicles, and at least 70 people, including villagers in Guangji Village of Jincheng Township in the provincial capital Kunming, were injured in the clash. Some police were also injured, according to Radio Free Asia (RFA).

One witness told RFA that police were firing teargas directly at the villagers. Another witness surnamed Pu said: “There were dozens of wounded villagers, with three or four being severely injured. The most serious injuries included broken ribs and a broken leg.”

A villager told the Epoch Times on Oct. 22: “It seems that the Kunming police force at all levels are being dispatched here, and special police from Anning City [near Kunming] are even being brought in. There are at least some 1,000 police being deployed in the village [Guangji]. Tonight, the whole village is going to be surrounded by police.”

State mouthpiece Xinhua, however, said, “There has been no report of injuries among the villagers.”

Posts of the clash on China’s microblogs and chatrooms were quickly deleted.

The conflict began when local authorities sold some 1,300 hectares of farmland belonging to 12 villages within the township of Jincheng last December. Their plan is to build a tourist resort in the area. According to locals, there was neither an official statement of the sale issued nor consent given by the residents. Farmers were also incensed over the small compensation offered for their land rights and what they say is collusion between officials and business. They worry about the uncertainty of their future without land.

The villagers have been protesting the illegal land requisitions and forced demolitions for almost a year, including petitioning to higher-level authorities. Their resistance has sparked repeated conflicts and clashes with security police between March and October, resulting in bloodshed and detentions.

“The massive land grab happening in Jincheng will result in nearly 20,000 farmers losing their farmland, tens of thousands of people being jobless, and numerous farmers falling back into poverty,” China’s cultural website www.crossingland.net quoted a local official as saying.

Protests and clashes between farmers and local officials over forced demolitions and land confiscations have become frequent occurrences in China since the 1990s.

According to a research paper by the New Zealand Contemporary China Research Centre, by the mid-2000s, land-related issues arising from state-led requisition, fueled by rapid industrialization and urbanization, has become the leading cause of rural grievances. Official statistics indicate that over 50,000 cases of land disputes in 224 cities took place between 2003 and March 2008.

In 2010, China experienced about 187,000 cases of “mass incidents” involving group protests and violent confrontation with government authorities, and approximately two-thirds of these incidents were about land disputes in rural areas, according to the Wall Street Journal.

A 2011 report by the Chinese Academy of Social Sciences (CASS) said the Chinese Communist Party has failed to properly assist landless farmers, and that 60 percent of farmers have petitioned high-level authorities over land seizures, as reported by New Tang Dynasty Television, an independent broadcaster in New York.

According to the CASS’ 2013 Social Development Blue Book, the number of annual demonstrations, petitions, strikes, and riots in China has been over 100,000 in recent years, with approximately half of these protests being about land grabs.

According to the bi-monthly magazine China Business Review, a 2011 survey conducted by the Landesa Rural Development Institute revealed that some farmers received compensation 40 times lower than their land’s market value, with government authorities retaining the difference as their revenue. Inadequate compensation is the biggest complaint among affected farmers, the survey showed.

China has an estimated 50 million landless farmers due to land expropriation during the past three decades. Some 60 million more may be uprooted over the next two decades, according to a Feb. 2012 report by the Monthly Review.

Translated by John Wang. Written in English by Christine Ford and Gisela Sommer.