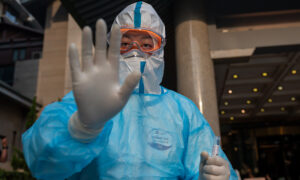 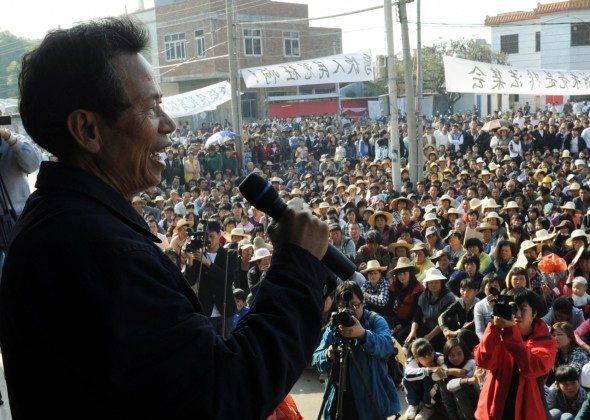 Zhuang Liehong, a village leader from Wukan, Guangdong, has asked for asylum in the United States, fearing he too will be arrested, after two other leaders were arrested recently. Villagers listen to a speech by Wukan village leader Lin Zuluan (L) at a rally on Dec. 21, 2011. (Mark Ralston/AFP/Getty Images)
China

A candidate for election in China’s test-bed for village democracy has applied for asylum in the U.S., afraid that he, like two other village leaders, will be arrested on trumped up charges, says Radio Free Asia.

Concerned at the growing harassment of those who took part in the 2011 protests in Wukan, Guangdong Province, former protest leader Zhuang Liehong arranged for a tour to the United States, and then remained in New York when the tour group returned to China. Now he and his wife have applied for political asylum.

“There were many signs that I would be the target of political persecution if I didn’t leave,” Zhuang explained in a Monday interview with Radio Free Asia.

“All the signs are that the authorities will start taking retaliatory action after [coming] elections in [March] 2014 against those who fought for their rights,” he added.

“That’s why I thought of running away to the United States,” he said, explaining that the Communist Party (CCP) in China detained two other former protest leaders for alleged bribery, shortly before the coming elections.

Zhuang, who arrived with his wife in New York in early February, said that the recent detention of elected village leaders Yang Semao and Hong Ruichao in recent weeks alarmed him. He told RFA he was afraid he would be next.

Accusations and counter accusations among the elected council members reveal the increasing interference in village governance by the Party.

The Communist Party has been evasive about the next round of elections, has not notified elected council members of meetings, and has insinuated Party members back into council positions.

“I told them they should call for nominations and publish a full list of candidates 10 days ahead of the elections… and have a public debate,” Yang told RFA.

“But the preparatory committee is being manipulated, and they don’t plan to call for nominations at all, or to publish a list of candidates,” he said.

“This election has turned into a travesty,” he added.

Wukan Village became famous in 2011 when the villagers revolted against corrupt official who had sold village land and pocketed the money. A settlement included permission from the Party for the village to hold free democratic elections, and the sacking of Communist Party officials involved in the corrupt land deals. Since then only about one third of the land has been recovered, and no compensation received for the rest.