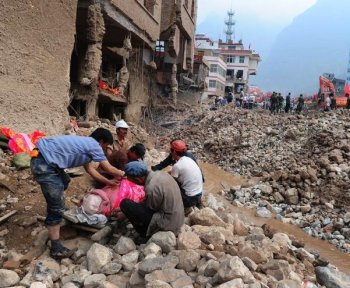 Surviving residents cover the body of a deceased relative resting on a makeshift stretcher amid the rubble of landslide devastation as rescue efforts continue in Zhouqu on August 11, in northwest China's Gansu province. (Frederic J. Brown/Getty Images )
China

Days after a mudslide devastated a village in Northwest China’s Gansu province on Aug. 7, Chinese officials reported 1117 deaths and 64 injures, with 627 people still missing. A local resident who was involved in the rescue effort, however, said the death toll was much higher. Yueyuan village is the largest in Zhouqu County, and was the first to be hit by the recent mudslide. It was also among the most severely destroyed, according to Beijing Morning News. Zhao Feng, a villager contacted by The Epoch Times, said that there were over 2000 people in the village, and that the whole establishment was engulfed within minutes.

Mr. Yin, who was involved in the rescue effort, told The Epoch Times what he has witnessed recently: “Too many households were buried, about 700 to 800. Over 300 houses in Yueyuan village are gone. Dozens of houses in Shannian village were gone as well. The No. 1 elementary school and the Open University buildings collapsed. Many people were trapped,” he said.

“The whole street of Beiguan, Zhongjie, Simen village and Chengguan were all buried. The tile factory was gone. There were many buildings over there—I can’t estimate the number of people. Chengguan township government building was gone and the 923 tree farm was gone as well. Over 50 households in Luojiayu village were gone. People who survived were those who went out for business trip. My estimate is that over 10,000 people died.”

"The bodies flowed downstream from Bailong River. This morning over 300 bodies were picked up at the bank of the Longnan section of Bailong. Many were washed down from Zhouqu. Over 100 bodies flowed down to Erhekou section of the river. Many more haven’t been dug out from the mud,” Yin added.

Wang Kai, a second year student of School of Foreign Language of Chongqing University of Technology, from Zhouqu County, was visiting his aunt in Zhouqu and reported what he saw using Twitter. His tweets attracted thousands of followers, along with audio recordings he made. “I arrived at the scene yesterday. It is so tragic that one cannot bear to look at it. The mudslide buried a few villages,” he says in one of the recordings.

Over the past three days soldiers and volunteers have searched the debris for survivors in Zhouqu County. But the sludge and debris prevents vehicles entering the disaster area. The rescue supplies cannot be delivered effectively there, which makes the rescue work even more difficult.