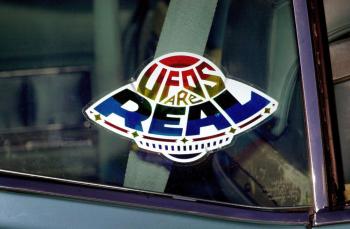 We usually consider flying saucers to be the vehicles of beings from a faraway galaxy, but Austrian scientist Viktor Schauberger helped develop such a disc-shaped flying machine at the end of World War II. (David McNew/Newsmakers 1302501)
Science

It may sound like a plot for a science fiction novel, but at the conclusion of World War II, the Germans had actually developed disc-shaped, fully functioning flying machines—what we now call flying saucers.

Viktor Schauberger, a gifted Austrian scientist (1885–1958), was the inventor of this unique flying machine. Known as the father of implosion technology—the same technology behind what made this German flying saucer a success story—Schauberger was not interested in an academic education. Instead, he was inspired by nature.

He talked of the importance of man’s cooperation with the natural world and famously claimed that “water is a living substance.” In fact, it was his study of water that led him to develop his ideas of implosion as a means of propulsion.

Schauberger's implosion principles are diametrically opposed to how today's explosion-oriented propulsion technology is utilized. Implosion involves a self-sustaining vortex flow of any liquid or gaseous medium, which in turn has a concentrating, ordering effect and which decreases the temperature of the medium, in opposition to the dictates of modern thermodynamics.

These words sound impressive, but why would the Nazis have spent a fortune to finance Schauberger's ideas? What did they hope to gain from such a last-ditch effort? And what technological hurdles still needed to be overcome?

The Nazis, in a desperate attempt to win, needed superior air power to turn the war in their favor, so they pressed Schauberger into service. At this time, he was already testing concepts of vortex dynamics when he constructed water sluices for log transport. This invention enabled him to move logs of an extremely high specific weight that normally cannot be transported on water. He did so by controlling water temperature and vortex flow. This success led him to develop the speedy flying discs as well as other hydroelectric projects, including the effective use of jet turbine hydroelectric power.

Using these liquid vortex principles, Schauberger supervised construction of actual working prototypes of levitating discs. While the initial prototype of the German-made flying saucer rose approximately 206 feet into the air before it crash-landed, some of these machines later flew considerable distances at tremendous speed. At the end of World War II, the remainder of Schauberger’s research work fell into Russian and American military hands.

After the war, Schauberger worked further on his inventions and perfected the concept of closed-cycle water-based power generation through vortex action, which had fueled these early-stage flying saucers.

In the late 1950's, U.S. and Canadian companies enticed him to come to North America with promises that further development and application of his technologies would be generously subsidized. However, as soon they discovered he wouldn’t cooperate with military application of his work, the deal was over.

One U.S. consortium is said to have confiscated his writings and patents, and would only permit his return to Austria if he signed a promissory document, not to promote his technology further.

Mr. Schauberger died five days after his return to Austria in 1958, a broken man, his dreams of additional research and development unrealized.

Because of the nature of his creative process, Schauberger’s documents can be difficult to decipher. However, many believe that further development of Schauberger’s ideas have been thoroughly suppressed by powerful fossil fuel interests. Today, Schauberger is celebrated by researchers in the Green Movement, as much of his work points to sustainable energy sources.

Olof Alexandersson's "Living Water" The German-language edition of the book is entitled "Lebendes Wasser," available from Ennsthaler Verlag, A 4402 Steyer/Austria.

Another source of information about Schauberger is the magazine Implosion (in German), published quarterly by Verein für Implosionsforschung und Anwendung, Windschlägerstrasse 58, D 77652 Offenburg/Germany. This German-language magazine is a precious source for many of Schauberger's original writings.