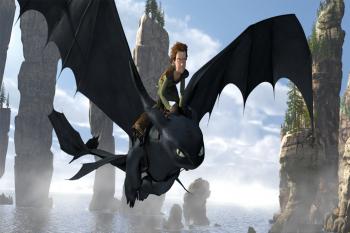 Hiccup (Jay Baruchel) befriends Toothless, an injured Night Fury - the rarest dragon of all - in 'How to Train Your Dragon.' (Courtesy of DreamWorks Animation)
Entertainment

Movie Review: ‘How to Train Your Dragon’

Leave it to Dreamworks to combine two fabled storybook topics—Vikings and dragons—into one movie, which will delight anyone between the ages of 3 and 103. Based on the book by Cressida Cowell, this film is like Beowulf meets Eragon, only in animated 3-D, funnier, and much less graphic.

Set on the island of Berk, where Vikings must do battle against dragons as a way of life. Instead of cockroaches, rats, or raccoons, the Vikings have to protect their homes, children, and livestock from dozens of varieties of dragons. Dragon fighting is a rite of passage into Viking adulthood and something that our string bean of a protagonist, Hiccup (Jay Baruchel), is desperate to master. His father, Stoick (Gerard Butler), is the town chief and a dragon slayer extraordinaire. He views Hiccup as, well, just that…

One night, during a fiery battle between the Vikings and dragons, Hiccup manages to capture a Night Fury, a species that no one has ever seen before. Hiccup tries to kill the Night Fury with the hope of proving himself to his father and his townspeople. However, he realizes the dragon is just as frightened as he is, and cuts him loose. Hiccup eventually enters into an unlikely friendship with the dragon, which he names Toothless because he’s able to hide his teeth when he wishes to appear less frightening. Their friendship changes both of their lives, as well as those of the townspeople.

I have to admit there were certain moments when I almost shed a tear or two. This film had all of the necessary ingredients for a thoroughly enjoyable film-going experience—a beautifully written storyline with heart, redemption, depth, and fantastic character development. Also, with a cast that includes funnymen Craig Ferguson, Jonah Hill, and Christopher Mintz-Plasse, there are many laughs along the way. Top that with gorgeous animation of the intense flying sequences presented in 3-D IMAX, and you have a near sensory overload. I’d be willing to bet that it will inspire a theme park ride sometime in the not too distant future.

I say drag(on) yourself to a theater near you to see this. I promise you won’t be disappointed!