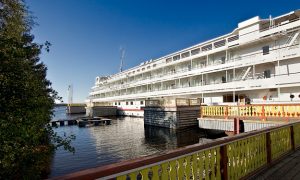 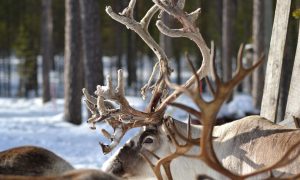 Antler Trade Led Up to Viking Invasion of England
0 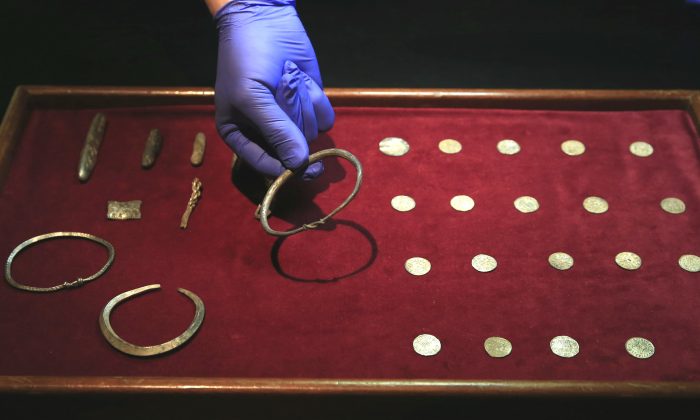 A close up of some of the jewellery and ingots of a significant Viking Hoard found near Watlington, in Oxfordshire, England as they are displayed at the British Museum in London, Thursday, Dec. 10, 2015. (AP Photo/Alastair Grant)
Europe

LONDON—A trove of Viking jewelry and Saxon coins unearthed by an amateur treasure-hunter in a farmer’s field may help rescue an English king from obscurity.

The Watlington Hoard, a collection of silver bands, ingots and 186 coins unveiled at the British Museum Thursday, dates from a tumultuous period. The coins were minted during the reign of Alfred the Great, ruler of the Anglo-Saxon kingdom of Wessex, who battled a “great heathen army” of Viking invaders during the 9th century.

By coincidence, discovery of the hoard coincides with the broadcast of “The Last Kingdom,” a big-budget BBC drama series that has piqued interest in the conflict between Alfred and the Vikings.

Alfred is renowned as the ruler whose victories helped create a unified England, but some of the coins in the hoard also bear the name of the far more obscure King Ceolwulf II of Mercia, a neighboring kingdom to Wessex.

“Poor Ceolwulf gets a very bad press in Anglo Saxon history,” said museum coins curator Gareth Williams. What little is known of him was written at Alfred’s court and paints Ceolwulf as “a puppet of the Vikings.”

Williams said the hoard contains coins that carry images of two Roman emperors side by side — evidence that the kings were allies against the Scandinavians, but that Ceolwulf was “airbrushed out of history” by the increasingly powerful Alfred.

“Here is a more complex political picture in the 870s which is deliberately misrepresented in the 890s,” Williams said.

“Perhaps we should be thinking more of Stalin and Trotsky, with Ceolwulf being airbrushed out of history because he’s no longer convenient.”

The find was announced by the museum as it reported on the Portable Antiquities Scheme, a government-funded project that encourages members of the public to report finds of archaeological interest.

The trove was discovered in October near Watlington, 40 miles (65 kilometers) west of London, by 60-year-old James Mather, an amateur treasure-seeker who called the find “every detectorist’s dream.” If it is declared treasure by a coroner, Mather and the landowner will split a reward equal to its value. The items will likely go to a museum.

With the help of local archaeology officials, the trove was dug up complete with the clay soil around it, bundled in cling wrap and taken to the British Museum.

It arrived looking like a “greasy clay haggis,” said British Museum conservator Pippa Pearce, who led efforts to explore the trove and restore the items to gleaming silver glory.

“I’ve worked at the British Museum for 42 years and sometimes it’s a shame to take the pay,” Pearce said. “This was a joy of a hoard to work on.”