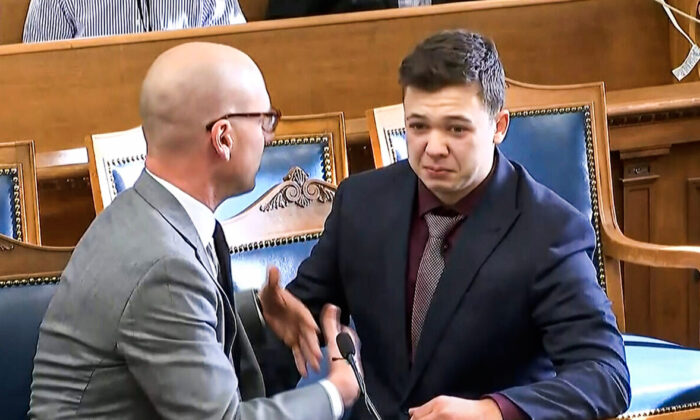 Kyle Rittenhouse (R) reacts after he's found not guilty on all counts at the Kenosha County Courthouse in Kenosha, Wis., in a still from video taken on Nov. 19, 2021. (Pool via CBS, Reuters/Screenshot via NTD)
Viewpoints

I’m thrilled at the Kyle Rittenhouse verdict. In fact, when it was read aloud in court, I felt a surge of emotion. Contrary to my normally stoical personality, I was even on the verge of tears.

My exhilaration was partly on behalf of Rittenhouse, a mere 18-year-old whose life had been saved, but it was also because of the toppling of a whole deceitful left-wing narrative. Even in the face of intimidation, this jury did the right thing, and its unanimous decision will have a lasting effect on our culture.

I confess that I was amused and even felt a touch of schadenfreude in the pained and constipated reaction of the journalists and pundits at CNN, MSNBC, and The New York Times. These are the people who had assiduously shaped the false narrative: Rittenhouse had no business being in Kenosha, Wisconsin; he was a chaos tourist; he carried an illegal weapon across state lines; he provoked the conflict by confronting the Antifa protesters; and on and on and on. Each of these lies were exposed in the trial and ultimately repudiated by the jury.

I realized it would be too much to expect that the media purveyors of falsehood would recognize that they had been busted, come clean, acknowledge their failed project, express contrition, and vow to do better next time. This would be like asking Milton’s rebellious demons to make their peace with God. These are the same liars who promulgated the Russia hoax, the impeachment hoax, the Jan. 6 insurrection hoax, and the “most secure election in history” hoax.

They haven’t shown an ounce of decency yet, so why start now?

Consequently, a new narrative is taking shape about Rittenhouse on the left and even in some quarters of the right. According to this modified narrative, Rittenhouse was a vigilante, even if one who might have, in that particular circumstance, acted in self-defense. So the lesson of Rittenhouse, from this perspective, is that while Rittenhouse got away with it, we don’t need vigilantism in our society. Vigilantism, not marauding Antifa looters, rioters, and arsonists, is the real threat facing the country. This is the message now from President Joe Biden, from the media menagerie, and even from some right-leaning pundits.

The problem with this modified narrative about vigilantism is that it’s based on an error of fact and an error of understanding, which, for a single argument, is accomplishing quite a bit. The error of fact is that Rittenhouse was no vigilante. He has parents and other family members in Kenosha, so he was protecting his own community. In no case did he behave like Charles Bronson in old vigilante movies such as “Death Wish.” In those movies, Bronson tracked criminals and simply gunned them down. Rittenhouse, by contrast, only fired when directly assaulted by Joseph Rosenbaum, Anthony Huber, and Gaige Grosskreutz.

But let’s take up the broader issue of vigilantism, because here the left’s narrative reveals a deeper failure of comprehension. I’ll discuss the issue not by examining “Death Wish,” but rather one of the classic Westerns from the early 1960s, John Ford’s “The Man Who Shot Liberty Valance.” Set in the mid-19th century, the movie depicts the transition of the Wild West, a lawless society dominated by gunslingers and outlaws, to a lawful society defined by sheriffs, lawyers, and courts to enforce order and justice.

In the film, the gunslinger played by John Wayne guns down the outlaw Liberty Valance. The credit for the killing—which is celebrated throughout the town of Shinbone—wrongly goes to the lawyer played by Jimmy Stewart. So, in the new America, there’s no room for gunslingers, and there are no more thugs like Liberty Valance, who live above or outside of the law. There’s only room for slick lawyer types, and, no surprise, Jimmy Stewart goes on to become an influential senator. So the film, in the end, celebrates a triumph over vigilantism.

Even so, the very logic of the film raises a provocative question: What if, following the progression of society to lawfulness from lawlessness, there’s a subsequent regression into lawlessness? That, after all, was the situation in Kenosha on the night that Rittenhouse had his confrontation with the Antifa “outlaws.” What if the Antifa thugs are out looting, rioting, and burning, and the police are nowhere to be found—the authorities have implicitly allowed the mayhem—and even the male citizens of Kenosha are cowering in their homes, afraid to take on the Antifa and Black Lives Matter marauders?

I would argue that in such a situation, there’s no alternative, in fact, there’s a deep social need for figures such as Rittenhouse. We can see this by considering a hypothetical town of Shinbone in which the ruling authorities sanction a new breed of outlaw to loot, riot, and burn down farms, stores, and homesteads. In such a world, sheriffs and deputies exist, but they’ve been instructed to stay away and let the marauding continue. In such a scenario, wouldn’t Shinbone once again need the services of John Wayne?

Of course it would. My conclusion, then, is that it’s the absence of law and order that creates the need for vigilante justice. Vigilante justice is crude and imperfect, but it’s still better than no justice at all. It’s still better than anarchy or rampant criminality. If I were Rittenhouse’s parents, I wouldn’t have permitted my teenager to go to Kenosha. But I would view the matter entirely differently if the adult citizens of Kenosha had shown up, together and armed, to prevent the mayhem.

Call them vigilantes. Call them whatever you want. They would, in the absence of the police and the authorities, be the vigilant ones—the thin blue line that protects the community from the barbarism that destroys not only property, but also life and civilization itself. They would be, as Rittenhouse himself was in this broken-down situation, heroes who deserve our respect and gratitude.