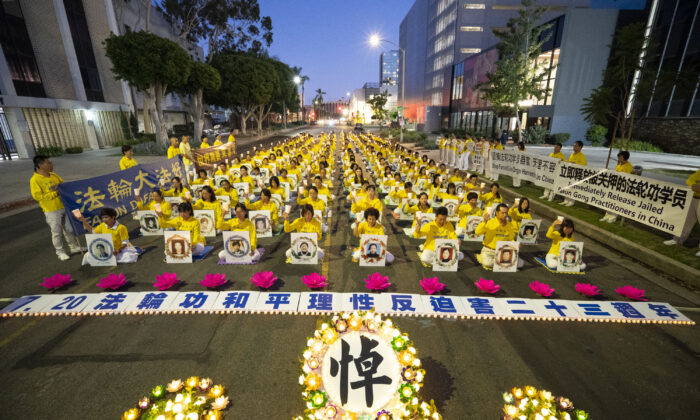 Falun Gong adherents hold a candlelight vigil in front of the Chinese Consulate to mark the 23 years of persecution by the Chinese Communist Party in Los Angeles on July 18, 2022. (Debora Cheng/The Epoch Times)
Southern California

LOS ANGELES—Nearly 200 Falun Gong adherents held a candlelight vigil in front of the Chinese Consulate July 18 to mourn their loved ones who were persecuted to death in China.

As the night fell, they sat in rows silently, holding candles and photos of those who have died as a result of religious persecution by the Chinese Communist Party (CCP).

“Today we [are here] to protest and condemn the Chinese Communist regime’s persecution against Falun Gong practitioners in China for the past 23 years,” said Yingnian Wu, a UCLA professor and the spokesman for practitioners in Los Angeles.

Falun Gong, also known as Falun Dafa, is a traditional Chinese spiritual practice consisting of five meditative exercises and teachings based on the principles of truthfulness, compassion, and forbearance. Its popularity during the 1990s—with almost 100 million practicing in China, according to official estimates at the time—drew the CCP’s attention.

The party then launched a systematic elimination campaign against the practice on July 20, 1999. Since then, millions have been detained inside prisons, labor camps, and other facilities, with hundreds of thousands tortured while incarcerated, according to the Falun Dafa Information Center.

At the vigil, Wu commended practitioners’ more than two decades of peaceful resistance and tireless efforts in raising awareness.

“This persecution is very evil and very brutal,” Wu said. “I hope that you can join us to stop the persecution by telling other people.”

He also encouraged community members to contact their congress representatives and other government officials for more action.

Helen Lee, who has been practicing Falun Gong for more than 20 years, said many practitioners have experienced significant improvements in their mental and physical health.

“By becoming more truthful, compassionate, and tolerant, [they] elevated their morality, took fame and wealth lightly, and improved their health,” she said.

Although the persecution has caused the separation of countless families and at least thousands of reported deaths, she said, they never flinched or thought of giving up their faith.

Xinhua Dong, a 65-year-old practitioner, said her mother and older brother both lost their lives because of the persecution. Her younger brother Yiran Dong, she said, was nearly killed in 2004 because he refused to give up the practice.

“The police tortured him all night. They poured cold water on him with the window open at -18 degrees Fahrenheit, … [beat him] with a belt until it broke into two, and [shocked him] with multiple electric batons at the same time. He was not allowed to sleep and was slapped when he dozed off,” she said.

According to Dong, her brother has been detained multiple times and monitored by local police in the past 23 years in China, and he has not been released yet. Dong said she was very concerned about her brother’s health and called for his immediate release.

Falun Gong practitioners in China have been subjected to detention and torture—including sleep deprivation, tube feeding, brainwashing, and harsh slave-labor conditions, according to Minghui, a U.S.-based website that chronicles the CCP’s campaign against the practice.

Many have also met death through forced organ harvesting, which has become a billion-dollar transplant industry operated by the Chinese regime since 2000, according to the 2019 conclusion of the London-based, nongovernmental China Tribunal.