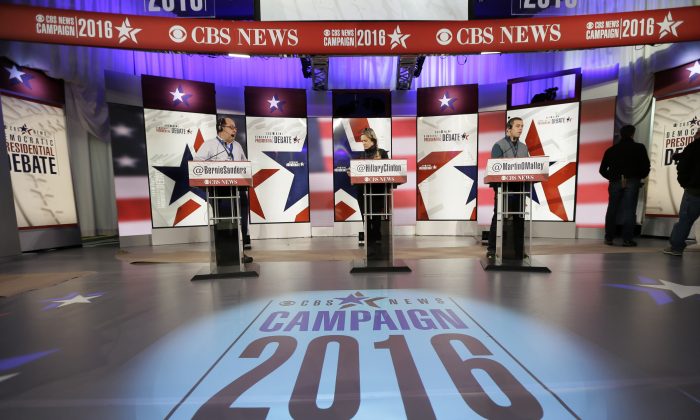 DES MOINES, Iowa—Hillary Rodham Clinton has been on a hot streak since the first Democratic presidential debate last month. The main question heading into Saturday’s second encounter: Can her two challengers slow down her Big Mo’?

Clinton expects to face a more direct challenge from Vermont Sen. Bernie Sanders and former Maryland Gov. Martin O’Malley in their first debate since the Democratic field has winnowed down to three candidates. Both Sanders and O’Malley have taken steps to point out their differences and the underdog ex-governor is also trying to undercut Sanders as Clinton’s main alternative.

The debate at Drake University in Des Moines comes after attacks on several sites around Paris left more than 100 people dead Friday night, a topic certain to gain attention on stage.

Sanders hopes to reach Iowans sizing up the field—especially older voters and women who favor Clinton—along with a national audience which will include the diverse coalition of black, Latino and female voters who twice backed President Barack Obama but have largely coalesced around Clinton.

Some things to look for in the two-hour debate:

Can Anyone Trip Up Clinton?

Clinton’s strong performance in the first debate kicked off a winning streak: Vice President Joe Biden decided not to run for president, she emerged unscathed during an 11-hour visit to the congressional panel on Benghazi and saw her poll numbers rise in the aftermath. Even a San Antonio rally alongside Housing Secretary Julian Castro, viewed as a potential vice presidential pick, created buzz about a future Democratic ticket. In short, she has a good problem to deal with: How to manage soaring expectations. “She wants to make sure people know where she stands on the issues,” Clinton spokeswoman Karen Finney said in Denver. “I’ve seen some of the coverage of what the other candidates’ strategy is going to be but our strategy remains the same.” The Paris attacks are likely to garner attention at the start of the debate and allow Clinton to talk about her experience as secretary of state.

The former secretary of state has little incentive to toss verbal bombs. When asked to describe the differences in the race, she typically says there’s little that separates Democrats on policy compared to a jumbled Republican race. Clinton doesn’t want to alienate the loyal following Sanders has built among young voters. But Sanders and O’Malley appear more inclined to highlight their differences with Clinton, including the Keystone XL pipeline (they opposed it, she avoided the issue and then opposed), the Trans-Pacific Partnership (they oppose it, she eventually got there) and the federal minimum wage (they want $15 an hour, she’s for $12 an hour). Look for Clinton’s recent comments in New Hampshire about “illegal immigrants” and her past support for a border fence to play a factor in the discussion.

In the first debate, Sanders famously said Americans don’t care about Clinton’s “damn emails,” suggesting the inquiry into her use of a private email system should be off-limits. He has since taken a different tactic, reiterating that the investigation should play its course. As Clinton has consolidated support, Sanders has pointed out their differences on the environment, trade, the federal minimum wage and gay marriage. So any strong suggestions from Sanders that Clinton’s email practices should be relevant in the primaries would be noteworthy. Sanders’ advisers say the senator will highlight the differences in the race but won’t let it get personal. “It’s not like there’s a wild imperative to go after someone in the debate. This campaign is doing phenomenally well,” said Sanders campaign manager Jeff Weaver.

Mired in single-digits, O’Malley is running out of time, low on cash and ready to challenge both Clinton and Sanders. But can he shake up the race? His appearance at a South Carolina forum sponsored by MSNBC may have been his best of the campaign and included several barbs, including criticism of Sanders for suggesting in 2012 that Obama might need a primary challenge. Nearly six months into his campaign, O’Malley is still searching for a high-profile, breakout moment that will make more Democrats give him a second look. But he’s still relatively unknown, so slash-and-burn tactics carry some risk.

Much of Sanders’ appeal has been derived from his unconventional persona and his long commitment to the plight of distressed workers. The 74-year-old “democratic socialist” is an atypical presidential candidate but he could tarnish his brand if he goes negative on Clinton. Clinton could see a preview of things to come if any Democrat portrays her as a poll-driven, political chameleon more motivated by winning than standing up for principles. Republicans hope to make that case in the fall and would welcome any help now.

Sanders is building a strong organization in Iowa, especially on college campuses, and has shown strength in New Hampshire, which has a history of rewarding candidates from New England. But by mid-February, Democrats will need to appeal to a more diverse electorate in South Carolina, Nevada and a litany of “Super Tuesday” states in the South. Sanders won the endorsement of a top black Democrat in Ohio, former state senator Nina Turner, and will hold a rally in her hometown of Cleveland on Monday. His team hopes it signals a breakthrough in connecting with a bigger swath of the Democratic base.