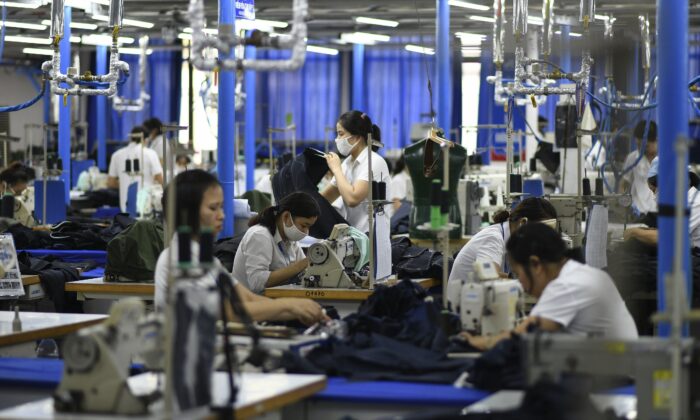 Vietnam reported positive production and operating data through July with Moody’s Analytics raising its forecast of the country’s GDP growth to 8.5 percent, making it its highest growth projection in Asia-Pacific.

This comes as China to the nearby north has been showing further signs of an economic downturn.

Despite a slowdown in Vietnam’s exports in July, Moody’s was optimistic about the country’s economic outlook due to it being a significant beneficiary of China’s uncertain policies, a Moody’s report said on Aug. 15.

The report stated that the uncertainty of the Chinese Communist Party’s (CCP) policies had driven foreign investment to Vietnam and other Southeast Asian countries. Supported by sustained foreign investment inflows, Vietnam had also “rapid improvement in industrial production and export trade.”

According to Vietnam’s ministry of planning and investment, from January to July, the capital generated by foreign direct investment (FDI) in Vietnam was estimated at $11.57 billion, an increase of 10.2 percent y-o-y, the highest amount of FDI for seven consecutive months in the last five years.

IPI is a monthly economic indicator measuring real output in the manufacturing, mining, electric, and gas industries relative to a base year, as defined by Investopedia.

A comparison of past data showed rapid recovery of Vietnam’s various industries.

The IPI growth rates in the first seven months of 2018 and 2022 were 10.7 percent, 9.4 percent, 2.6 percent, 7.6 percent, and 8.8 percent, respectively. The figure would appear that Vietnam’s economy is quickly recovering from the COVID-19 pandemic as more capital moves out of China and into Vietnam.

In addition, for the first seven months this year, the IPI values of some products increased sharply. For example, apparel and electrical equipment manufacturing saw an increase of 23.1 percent and 21 percent, respectively. Meanwhile, pharmaceuticals, medicinal chemicals, and botanical products rose 20.1 percent.

In the first half of 2022, Vietnam’s GDP grew 6.42 percent, higher than the 5.5 percent forecasted by the country’s statistics bureau. The Vietnam government’s GDP growth target for 2022 is 6 to 6.5 percent.

Meanwhile, the economy in China slowed further in July as Beijing’s zero-COVID policy has continued to drag down many key industries.

According to the national statistics bureau (NSB), the total profits of industrial enterprises above the designated size were 4.89 trillion yuan ($710 billion), down 1.1 percent year-over-year (y-o-y).

The NSB defines industrial enterprises above the designated size as industrial businesses with revenue from principal activities over 20 million yuan ($3 million).

The data showed that 25 out of 41 industrial sectors in China, or 61 percent, recorded a y-o-y decline in total profits. Among them, the ferrous metal smelting and processing industry decreased by 80.8 percent y-o-y, citing weak demands due to the slumped property market.

China’s industrial GDP growth was 3.3 percent for the year’s first half but only 0.4 percent in the second quarter, representing a significant decline.