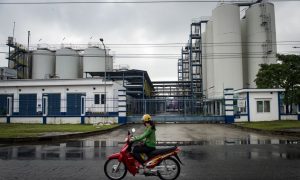 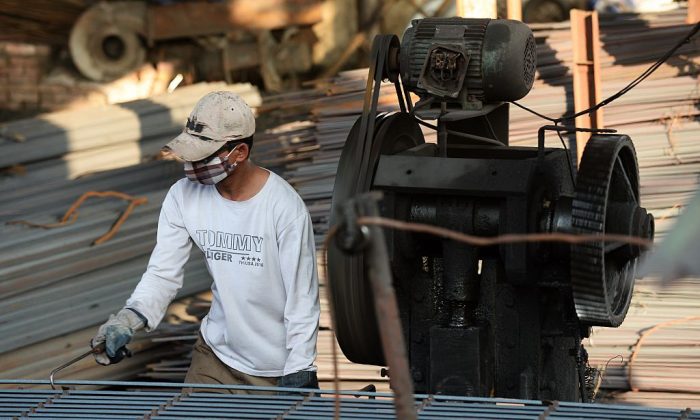 A man works at a private steel workshop in the Dong Anh district on the outskirts of Hanoi, Vietnman, on Nov. 14, 2014. (Hoang Dinh Nam/AFP/Getty Images)
Chinese Regime

As China has been trying to reduce its steel capacity, it is looking into overseas markets to buy its steel products due to weak demand at home as a result of the economic slowdown. The downturn has been exacerbated by the effects of the ongoing Sino-U.S. trade war.

Vietnam is one of these overseas markets targeted by China since the country is Southeast Asia’s biggest steel consumer.

Formosa Ha Tinh Steel (FHS), founded in 2008 and based in the Vung Ang Economic Zone in Vietnam’s central province of Ha Tinh, said its production expansion plans, including a proposal to build another blast furnace, could be put on hold as a result of such market changes, according to Nikkei.

FHS currently has two blast furnaces, which involves the process of smelting iron ore to produce crude iron, allowing the company to produce 7.1 million tons of crude steel per year. The planned construction of the third blast furnace would push its production capacity to 22.5 million tons per year.

“We will carefully examine the plan as uncertainties are growing over the outlook of the U.S.-China trade war,” said FHS Chairman Chen Yuan-cheng in an interview with Nikkei.

He added that the final decision about the third furnace could be made by the end of the year after talking with the company’s three main shareholders and the Vietnamese government.

Contrary to the slowing Chinese economy, Vietnam’s economy has enjoyed strong growth in recent years, with average GDP (gross domestic product) growth of 6 to 7 percent. At the same time, the country’s steel consumption has increased from over 10 million tons in 2013 to over 22 million in 2018.

Currently, steel imports coming into the U.S. market face 25 percent tariffs, which was put in place by the Trump administration in March last year. There are a handful of exempted countries: Argentina, Australia, Brazil, Canada, Mexico, and South Korea.

According to data from the International Trade Administration, an agency in the U.S. Department of Commerce, the United States imported a total of 30.8 million metric tons of steel from more than 85 countries and territories in 2018.

That year, the top ten steel exporters to the U.S. market were Canada, Mexico, Brazil, Taiwan, and Vietnam. China did not make the top ten.

In June 2018, Reuters reported that China was looking for new steel buyers in Africa and South America.

Meanwhile, Vietnam has also benefited from the trade war. As manufacturers seek to avoid U.S. tariffs on China-made goods, they have been moving production away from China and into Vietnam. The Financial Times, citing its own analysis, reported on June 23 that Vietnam’s exports to the United States increased by nearly 40 percent for the first four months of this year compared to the same period the year prior.

Over the same timeframe, Chinese exports to the United States fell by 13 percent.

Vietnam has been able to make export gains in sectors where their Chinese counterparts have been hit with U.S. tariffs. Vietnam is now shipping more smartphones, textiles, seafood, and semiconductors to the U.S. market.