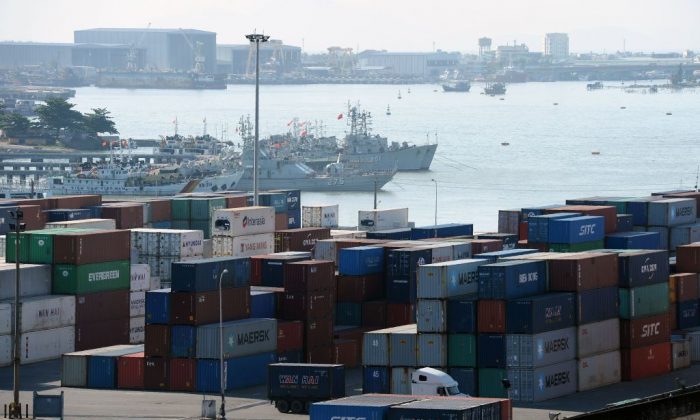 Many companies intent on moving production out of China to avoid U.S. tariffs have set their eyes on Vietnam as an alternative production base.

Recently, Japanese trading company Sumitomo decided to take advantage of the trade diversion to Vietnam by announcing a major investment into a local port operator.

On July 7, Nikkei Asian Review reported that Sumitomo, along with Japanese logistics company Suzuyo and an unnamed Japanese public-private fund, has bought a 10 percent stake in Gemadept, a company based in Ho Chi Minh City that owns six ports in the Southeast Asian country. The company is publicly traded on the Ho Chi Minh Stock Exchange.

Sumitomo spent about 4 billion yen (about $37 million), accounting for more than half of the combined spending by the three Japanese investors, according to Nikkei.

Four days before the Nikkei report, local media in Vietnam also reported that Sumitomo’s subsidiary in Vietnam, SSJ Consulting, had registered to purchase nearly 297 million shares, equivalent to a 10 percent stake, in Gemadept. The stock purchase will be carried out between July 5 and Aug. 5.

According to Vietnamese media, SSJ obtained its business license in June.

With the 10 percent stock investment in Gemadept, Sumitomo will bring factories, logistics facilities, and local ports under its management, bringing down costs while increasing efficiency, according to Nikkei.

In terms of cost savings, Sumitomo estimated that by being able to track the movements of trucks driving between the port city of Hai Phong and the capital, Hanoi—and ensuring that cargo is loaded both ways of the trip—the company could save $18 million annually.

“With the U.S.-China trade war, the number of containers handled will increase further,” an unnamed Sumitomo source told Nikkei.

Japanese investment bank Nomura pointed out in an analysis in June that Vietnam has gained 7.9 percent of its gross domestic product (GDP) from trade diversion due to both U.S. and Chinese tariffs. The United States has tariffed roughly $250 billion worth of Chinese goods, while the Chinese side has retaliated with duties on roughly $110 billion of U.S. goods.

In one example, Marubeni, a Japanese trading company, is building a cardboard box plant outside of Ho Chi Minh City in order to meet the increased demand for cardboard boxes used to ship electronics goods and apparel products, according to Nikkei. The plant is expected to be operational in 2020.

Foreign direct investment (FDI) is also increasing in Vietnam. According to an analyst report by Citi, FDI has increased by 69 percent in the first five months of this year.

With the increased trade activity, Vietnam is also on high alert for any illegal transshipment, especially Chinese goods that are being mislabeled as “Made in Vietnam” in order to skirt U.S. tariffs.

In early June, Vietnam’s customs department released a statement on its website saying it was cracking down on such activities. According to Reuters, U.S. customs uncovered a case of a Vietnam-based manufacturer of timber products that was relabeling and exporting Chinese-origin timber to the United States.