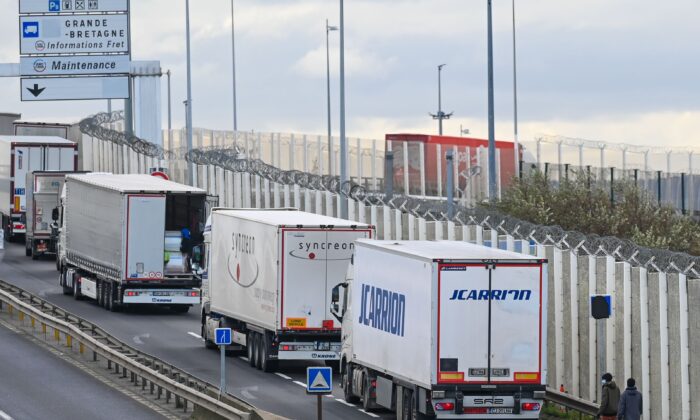 Illegal immigrants walk to climb into the back of lorries bound for Britain while traffic is stopped upon waiting to board shuttles at the entrance to the Channel Tunnel site in Calais, northern France, on Nov. 19, 2020. (Denis Charlet/AFP via Getty Images)
UK

A Vietnamese man has been arrested in Birmingham on suspicion of being a high-ranking member of a people smuggling network, the UK’s National Crime Agency (NCA) said.

The 23-year-old man was detained during a raid on a property in the Handsworth area at around 6 a.m. on Monday.

He was detained by NCA officers as he attempted to exit the building out of a window onto a flat roof below.

The arrest is part of an investigation into the smuggling of mainly Vietnamese illegal immigrants into the UK in the backs of lorries in August and September 2020, the NCA said.

The man is now being questioned on suspicion of assisting illegal immigration to the UK and money laundering offences.

Paul Boniface, NCA Branch Operations Manager, said the agency is “determined to disrupt and dismantle people smuggling networks wherever they are operating.”

“These groups treat people as a commodity to be profited from and are quite happy to put lives at risk in dangerous journeys in the back of trucks or in small boats.”

Boniface said the investigation is still ongoing as “protecting life and preventing exploitation are our priorities.”

The NCA did not disclose whether this latest arrest was in any way linked to the deaths of 39 Vietnamese illegal immigrants in 2019.

The 39 illegal immigrants, aged between 15 and 44, suffocated to death in the back of a refrigerated lorry as they tried to make their way to the UK on Oct. 23, 2019.

On Jan. 22, 2021, seven men convicted over the deaths of the 39 immigrants were sentenced to a total of 93 years and eight months in prison.

In June, UK police arrested a Vietnamese national in connection with the incident. He was allegedly part of a human trafficking network that moves immigrants into the UK through Belgium and France in the back of lorries, the NCA said at the time.

In March, a Turkish lorry driver was arrested after 16 illegal immigrants from Morocco, Algeria, and Pakistan were found hidden in the lorry’s trailer.

In February, police in Cambridgeshire reported two incidents in which they rescued illegal immigrants from the back of refrigerated lorries.

In 2000, 58 Chinese immigrants were found dead in the back of a truck in Dover. The driver was later found guilty of manslaughter.