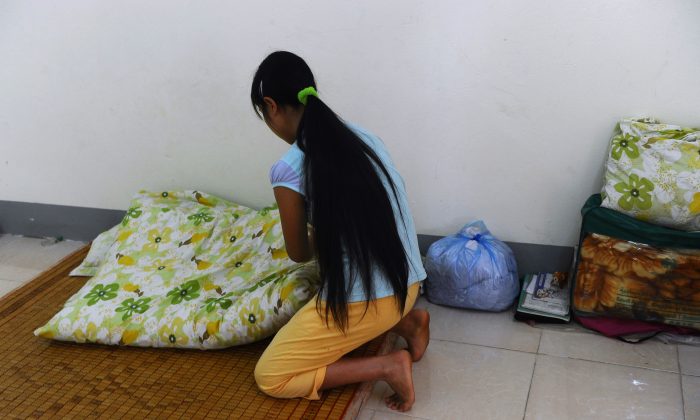 This picture taken on May 9, 2014 shows H'mong ethnic girl arranging her bed at a centre for trafficked women. When she turned 16, her brother promised to take her to a party in a tourist town in northern Vietnam. Instead, he sold her to a Chinese family as a bride. (HOANG DINH NAM/AFP/Getty Images)
News

Dozens of villagers in southeastern China were in for a rude shock on when their Vietnamese wives, some pregnant, disappeared in a coordinated escape.

All of the women, who had been bought into marriage for thousands of dollars, had been with their husbands for half a year or less, the state-run Quanzhou Evening News reports. One had been married for less than a month. Most could speak Mandarin Chinese.

Fang Shaojun, a 29-year-old man living in the village of Zhongxin, had paid 50,000 yuan (about $7,000) to the broker to marry his wife Ruan Xiaoyan (her Chinese assumed name) last November.

“My wife knew Mandarin but not the local [Fujianese] dialect,” Fang told Quanzhou Evening News. “I’ve seen her identification, but it was in Vietnamese so I couldn’t read it.”

He says his wife was hardworking and gave absolutely no indication of wanting to leave him. She made her move at lunch, saying that she wanted to go visit a Vietnamese girlfriend in the same county.

Soon thereafter, Fang got a call from a friend informing him that his wife, as well as many others had disappeared.

Ruan, like the other women, are illegal immigrants. Vietnamese in China as brides often come in search of work to escape poverty in their home country, while their prospective husbands are typically rural Chinese at the bottom of the socioeconomic ladder. The marriages are not legally binding—Fang and Ruan did not even carry out a ceremony.

The mass escape of Vietnamese brides in Fujian is not unique. In 2010, the Southern Weekly newspaper ran a feature about a farmer surnamed Feng in Jiangxi Province whose Vietnamese wife not only ran away after just twenty days of marriage, but also took 20,000 yuan (about $3,000) in his savings with her.

That April, a group of 20 Vietnamese wives escaped in a collective plot.

But when asked for his plans for the future, Feng declared his intention to save another 50,000 yuan for another bride, though this time not from abroad.

Feng was prepared for his future wife to abscond as well, but remarked that he wouldn’t mind as long as she bore him a son first.

China suffers from a significant gender imbalance in part caused by 35 years of the communist regime’s one-child policy. Many poorer parents opted for female infanticide for the chance to have sons, who are more likely to bring in the income needed to support elders in old age.

Young Chinese women, now outnumbered by men to the order of several tens of millions, have become bargaining chips in what are essentially business deals between families. It’s common for middle-class men to have to pay tens of thousands of dollars in betrothal gifts to secure an engagement with the bride’s parents.

It is in light of these social difficulties that the bride trafficking business has taken hold in China. Vietnamese and other southeast Asian women are common sources in the south, while those from North Korea are often tricked into marriage brokering services or willingly settle for life with Chinese men to escape the grinding poverty under the Kim regime.

China Changes Its One-Child Policy, but Will It Change China?
TOP NEWS