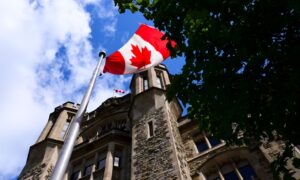 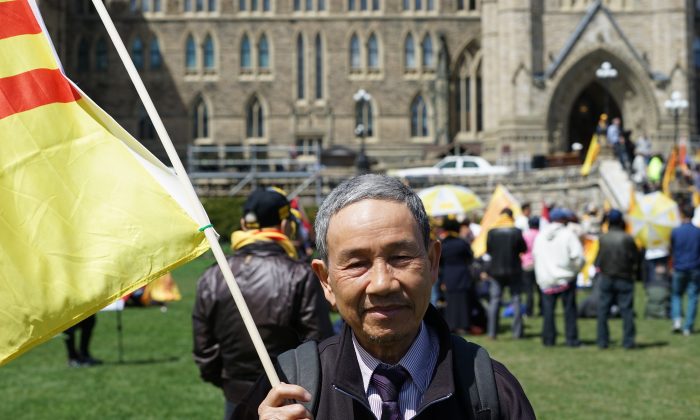 Mien Nguyen holds a flag at the Journey to Freedom Day rally on Parliament Hill, April 30, 2015. Nguyen and his family walked through Cambodia to Thailand to escape from Vietnam before they eventually made it to Canada. (Pam McLennan/Epoch Times)
Canada

OTTAWA—Forty years ago on April 30, 1975, Republic of South Vietnam president Duong Van Minh surrendered Saigon to the communist North Vietnamese forces. Although the act ended 30 years of war, it also ended democracy and human rights for the Vietnamese people.

Despite the new peace, citizens throughout South Vietnam fled the country in droves as soon as they could, seeking freedom from repression. Many were welcomed in Canada as refugees

The date resonates on many levels in the Vietnamese populace both at home and in Canada, as it meant the loss of their country and the beginning of hardship under the new regime as thousands were arrested and imprisoned in re-education camps.

We felt we lost everything, even our souls.
— Vietnamese-Canadian Mien Nguyen

On April 30 in Ottawa, hundreds of Vietnamese-Canadians attended the inaugural Journey to Freedom Day activities on Parliament Hill. The event drew people from Winnipeg, Toronto, Ottawa, and Montreal. Members of the Polish community participated in support.

Activities began with a rally at the site where the Memorial to the Victims of Communism is slated to be built later this year. Many speakers, including Minister of State Pierre Poilievre, talked about the need for the memorial and the suitability of the location.

“This is a worthy project, it is the right thing to do, and under the strong leadership of Prime Minister Harper we will build this monument,” Poilievre told the crowd of about 500.

Ludwig Klimkowski of Tribute to Liberty, the charity dedicated to building the memorial, talked about his disappointment that the site has been criticized. He said that 8 million Canadians come from countries affected by communism.

Senator Thanh Hai Ngo noted that 250,000 boat people perished at sea as they tried to leave their homeland to escape communist rule.

A group of former South Vietnamese soldiers were present in their uniforms, standing with straight backs and full military bearing during the speeches.

Participants then marched up Wellington Street to Parliament Hill for a second rally. It began with a moment of silence, accompanied by a lone trumpeter, for all who lost their lives fighting for democracy in Vietnam.

Defence Minister Jason Kenney, Anne Minh-Thu Quach, NDP MP for Beauharnois-Salaberry, and Mark Adler, Conservative MP for York Centre, were given plaques commemorating the 40-year anniversary of the fall of Saigon and thanking Canada for accepting the many Vietnamese refugees who arrived in the following years.

On Dec. 3, 1977, the first boat people left Vietnam. It was a difficult journey and many perished. Those who survived found freedom wherever they settled, starting their lives over.

Mien Nguyen was in Vietnam in 1975. He said it felt hellish there when South Vietnam fell.

“We felt we lost everything, even our souls, and that’s why we escaped to anywhere we can.”

As a bank employee he was allowed to keep his job as he was providing an essential service. But once the regime didn’t need him anymore, he and others were fired. After five years Mien and his family escaped.

“I walked from Vietnam to Cambodia, and through Cambodia to Thailand. It took more than a month,” he said.

From Thailand, he and his family flew to Canada. His first job was washing dishes in a restaurant. “I come here, I need the freedom, that’s all. I don’t care what type of job I do.”

Toronto resident Le Quang Man was a soldier in the Republic of Vietnam army when the takeover occurred.

“In April 1975 we didn’t expect it would end that way. People were still fighting the communists even after that. There were a lot of organizations like the United National Front of Vietnam fighting after the war,” he said.

He explained that a lot of people were detained in refugee camps and some were sent to re-education camps. He knew he would be singled out because he had served in the army.

“I was detained in the re-education camp for nine years. After that, I spent six years under the communist regime before I could escape from Vietnam. I went through a lot of hardship, as they wouldn’t leave me alone. I underwent a lot of stress physically and mentally,” he said.

Man’s son escaped by boat and, after settling in Canada, sponsored his father to come here as well.

There were a lot of “thank you Canada” cheers from the crowd at the rally as people living here expressed their sense of freedom and gratitude to Canadians and the Canadian government.