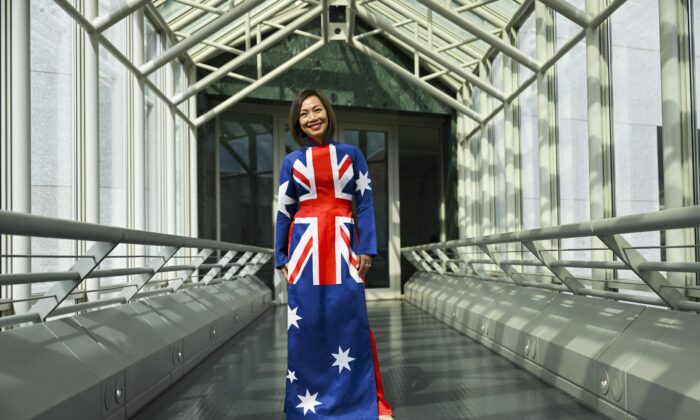 Independent MP for Fowler Dai Le poses for photographs in her Australian flag inspired dress after delivering her first speech in the House of Representatives at Parliament House in Canberra, Monday, September 5, 2022. (AAP Image/Lukas Coch)
Australia

In her maiden speech to Parliament, Independent MP Dai Le recounted her journey of fleeing Vietnam, expressed gratitude for Australian values, and criticised pandemic lockdowns while urging the government to unlock the potential of the country’s large migrant workforce.

The Vietnamese-born MP managed to defeat high-profile candidate Kristina Keneally in the traditionally safe Labor Party seat of Fowler, a Western Sydney electorate made up primarily of migrants, refugees, and low to middle-income families.

Wearing an áo dài—a traditional Vietnamese dress—emblazoned with the Australian flag, Le said she wanted to “combine both worlds, the two worlds I constantly straddle.”

During her address, the independent MP also called on the government to increase job opportunities for the migrant workforce like those in her electorate of Fowler, where the unemployment rate is 10 percent.

She noted that the Fowler community needed a representative who remembered their personal challenges “not just at election time but every day.”

“While it is a privilege to represent the people of Fowler, we are not a privileged people.”

“We are the forgotten people, and yet we are the backbone of Australia.”

Le used the government’s harsh COVID-19 lockdown in Western Sydney as an example of the major parties “neglected and abandoned” her constituents.

The MP expressed frustration when saying people in her community weren’t allowed to travel beyond a five kilometre radius from their homes, were told to get travel permits, forced to get tested every three days and were constantly monitored by police.

“The last time I looked, a government that takes away individuals’ liberty to choose how they want to live, work and raise families was called a communist dictatorship, a political system that my family and I escaped from,” Le said.

As the country is grappling with a skills shortage, Le encouraged the government to capitalise on the local workforce and suggested that the development of public transport and housing should catch up with the increase in migration.

“We have migrants and refugees with professional qualifications who are now working in under-qualified occupations,” she said.

“We must work to swiftly create pathways for recognition of their qualifications so that we can engage their skills in our community.”

In a moving passage, Le described how her family escaped from the communist regime in the 70s on a boat and thought they “would die” when they were hit by a storm.

“I … remember my sister and I hanging on for dear life while my mother held onto her,” she said on Monday.

“I remember being soaking wet as the ocean hit us in the rain poured down. I remember how my face almost hit the ocean as our boat dropped so hard from the storm and my mother’s warning that I had to hold onto my sister and the plastic canister just in case the boat would tip over until we could find one another.”

“Trying to peer through the tarp, all I could hear was the storm, and I was terrified we couldn’t survive. Because none of us could swim.”

“The storm subsided the next morning, but everyone was exhausted. I remember seeing bodies on the boat like dead corpses.”

After moving between refugee camps overseas, Le’s family eventually arrived in Australia, where they were “filled with hope as we looked out onto the horizon of endless possibilities.”

“This migration story belongs to all of us,” she added, “It’s our story, and we can all be proud to share it.”