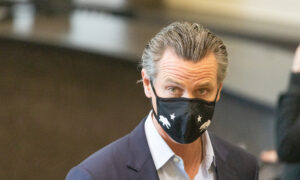 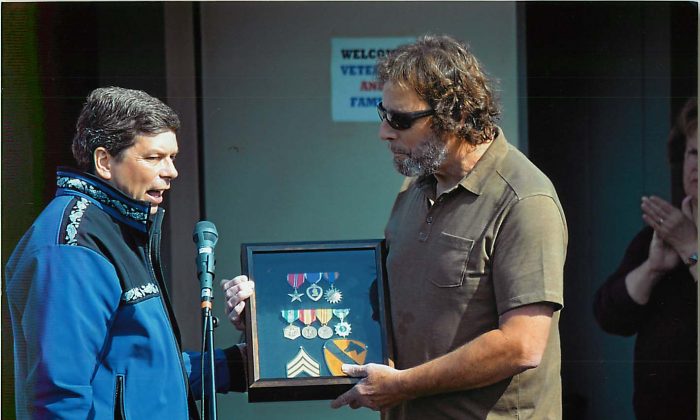 Sen. Mark Begich (D-Ala.) (L) delivers several medals to Randy Clifford in 2014 that were awarded to him but were lost when he was flown back to San Francisco from Vietnam after being shot. (Photo Courtesy of Randy Clifford)
Northern California

During the war, they experienced pride and loyalty, but often returned home to a thankless reception from protesters
By Jehman Clifford
biggersmaller
Print

Forty-three years after its conclusion, the Vietnam War remains arguably the most controversial conflict in American history.

To some, the 20-year struggle was a misguided and ill-planned attempt by the United States to meddle in foreign affairs. To others, the war began as a noble American attempt to protect South Vietnam from the communist North, and ended in a shameful betrayal of the South.

The Epoch Times spoke with some Vietnam veterans to get their opinions as to why we were in Vietnam, and to hear their personal experiences fighting and coming home to a nation that largely gave them a cold, and often hostile, reception.

When Randy Clifford started high school in 1964, he had never even heard of Vietnam. By the time he graduated, five boys from his town who were a few grades ahead of him had been killed there.

After high school, Clifford attended one semester of college, and then he “got bored and joined the army.”

“Back then, we were angry at the Viet Cong and NVA [North Vietnamese Army] for shooting our friends,” he said.

Clifford served as a door gunner on a helicopter that rescued wounded Americans. He spoke of the pride and teamwork of military service.

“The military teaches you to work as a team and to take care of each other. In Vietnam, we were a true band of brothers. We thought nothing of risking death to rescue fellow soldiers,” he said.

Clifford said that he and his team heard of the anti-war protests back home.

“[However], we ignored them and made sure we protected and rescued any American that needed help. If we had to lose five helicopters and crews to rescue one American, that’s what would happen,” he said.

On March 21, 1971, Clifford was hit in the back with an AK-47 round while flying an air attack against the NVA.

Flown directly to a hospital, Clifford didn’t encounter any protesters upon his return home. However, he spoke of many of his friends who were verbally or physically assaulted upon arrival.

“It was bad. So many of my buddies came home to ridicule, abuse, and assault. That was the thanks they were given for risking their lives for their country. It harmed many of them in a big way,” he said.

Finally, Clifford spoke of the pride he feels for having served his country as a sergeant in the 1st Cavalry Division.

“While some hid in college, some ran to Canada, and others burned their draft cards while they marched and protested, I had the honor of serving with the bravest of my generation.”

Airman 1st Class Mark A. Kuehner served in the Vietnam conflict from 1966 to 1967 for the U.S. Air Force with the 389th Tactical Fighter Squadron of the 366th Tactical Fighter Wing, stationed at Da Nang AFB. He worked on the flight line, servicing, maintaining, and repairing the squadron’s aircraft, sometimes working on F-4 fighter jets, sometimes being drenched with Agent Orange, which was sprayed in Operation Ranch Hand.

Kuehner, who is currently in the hospital waiting for a diagnosis of an illness that has left him gravely ill, spoke slowly and sincerely, often with a catch in his voice.

He talked of enlisting to go to Vietnam.

“I needed a roof over my head, and Uncle Sam needed soldiers,” he said. “But seriously, it was the time of the Eisenhower Doctrine, and we believed we were trying to help those people [the South Vietnamese]. We believed that we were trying to prevent the spread of communism.

“It was my patriotic responsibility. I was patriotic and thought I was doing a service for my country. I’m still patriotic.”

The doctrine that Kuehner referred to was announced by President Dwight D. Eisenhower in January 1957 and approved by Congress in March of the same year.

Under the doctrine, a country could request American economic assistance or military aid if it was being threatened by armed aggression from another state.

The doctrine singled out the Soviet threat by promising “to secure and protect the territorial integrity and political independence of such nations requesting aid against overt armed aggression from any nation controlled by international communism.”

North Vietnam was a communist country backed by the Soviet Union, and South Vietnam requested the help of the United States.

Like Clifford, Kuehner spoke of the bond he and his fellow soldiers shared.

“There was an unbelievably strong spirit in the units there. There was such a strong bond of pride and loyalty and honor and doing the best you could. Those kids gave so much. Sometimes they gave more than their all. It was something you don’t see among people in normal life,” he said.

When asked about his reaction to the reception soldiers received upon coming home, he reflected quietly: “I started college under the GI Bill, but it was a bad scene. I thought, these kids don’t know what’s really going on in the world. I figured, so that’s how it is, and went out and got a job.”

Kuehner said he thinks that the veterans’ lives turned out better than non-veterans’.

“The veterans from Vietnam ended up doing better than the kids who stayed home. We took our values and sense of responsibility out into society, and we have done very well in business, even in the higher levels of government, in our towns and churches. I think that sense of responsibility and those values are what makes America a great country. We have our ups and downs, but it’s still the best place to live in this world.”

Karl Buder immigrated to the United States from Germany with his parents at the age of 13, after his father obtained a job in Georgia. In 1958, his father was transferred to Sunnyvale, California. After graduation, Buder attended Menlo College, where he received a degree in business.

Buder was aware of the escalating war in Vietnam. He was drafted, and because of his fluency in German, was assigned to a teaching job in the switchboard operator school in Fort Gordon, Georgia.

“Feeling rather smug about being in a relatively good job, I was shocked into reality when I received orders to report to Travis Air Force Base for further deployment to Vietnam on Dec. 16, 1966,” Buder said.

“Needless to say, when I informed my parents, they were devastated and even suggested that I return to Germany. It was something I could have easily done, as I was still a German citizen, but after much reflection, I decided to stick to my enlistment commitment and follow my orders.”

When asked why he thought the United States went to Vietnam, Buder said that he believed it was to stop the spread of communism.

“After spending a few months in Vietnam, I changed my mind and felt that any involvement in this type of warfare was futile, as our troops just weren’t adept at jungle warfare against far more seasoned opponents. I am still saddened that 55,000 young, productive lives were lost,” he said.

When asked what it was like to come back to America, Buder said that he was “thrilled to be home.”

“My father, having been solely responsible for bringing our family to the U.S., was clearly relieved that I was home safe, and as I stepped into our home, he gave me a hug that I had never experienced before. I could see tears of joy running down his face.”

Robert Piazza went to school at the California Maritime Academy. He enlisted and went to Vietnam in November 1965.

“Patriotism was a major factor in my opinions and feelings, and the threat of communism spreading into Southeast Asia was certainly the reason for our being there,” he said.

Piazza said he is concerned that the younger generation does not have a correct understanding of what communism is.

“Younger people don’t have an appreciation for what communism and socialism are. There are a lot of folks your age and younger who unfortunately don’t get it,” he told The Epoch Times interviewer, who is 40 years old.

Piazza spent a year and a half in Vietnam and finished out the last five months of his time working for the Military Sea Transport Service, transporting troops and materials from Oakland to Vietnam.

During this time, Piazza was confronted by anti-war protesters.

“When we came back to [San Francisco] and Vallejo, that was sort of the hotbed of that sort of stuff [anti-war protests],” he said.

“The only time I was directly confronted was when I had to arrive at the troop ship. Obviously, I had to drive down to Oakland, and there were always protesters at the gate, actually trying to keep you from going to work, which really pissed me off because I had to feed my family and certainly did not share their opinions about what they were protesting about.”

Looking back, Piazza remembers having mixed feelings about the protesters—anger at their attempt to block him from doing his job, and sympathy because he felt they were victims of brainwashing by their college professors.