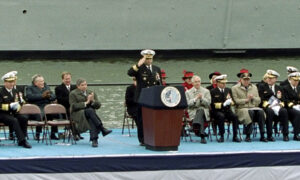 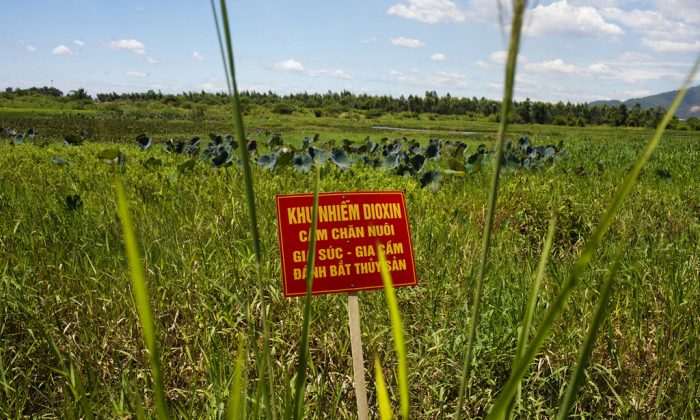 A warning sign stands in a field contaminated with dioxin near Danang airport, during a ceremony marking the start of a project to clean up dioxin left over from the Vietnam War, at a former U.S. military base in Danang, Vietnam. The sign reads; "Dioxin contamination zone - livestock, poultry and fishery operations not permitted." (Maika Elan/AP Photo)
US News

Vietnam, US Complete Cleanup of Toxic Chemical From Airport

HANOI, Vietnam—Vietnam and the United States have finished the cleanup of dioxin contamination at Danang airport caused by the transport and storage of the herbicide Agent Orange during the Vietnam War.

The 30 hectares (74 acres) of land cleansed of the toxic chemical were handed over to Vietnam at a ceremony Nov. 7 where Vice Defense Minister Nguyen Chi Vinh praised the U.S. government’s involvement in the cleanup.

“It is proof that we are opening a future of good cooperation between the governments of Vietnam and the United States,” Vinh said. “Today marks the day that Danang airport is no longer known as a dioxin hotspot, the day that Danang people can be assured that their health will not be destroyed by chemicals left over from the war.”

Large amounts of Agent Orange, which contains dioxin, were stored at Danang airport during the war and sprayed by U.S. forces to defoliate the countryside and deny communist fighters jungle cover. Vietnamese still suffer from the effects of the spraying.

U.S. Ambassador Daniel Kritenbrink called the joint cleanup a significant milestone in the expanding partnership between the two countries.

“This project truly is a hallmark of our countries’ shared vision to be honest about the past, deal responsibly with remaining legacy issues and turn a point of contention into one of collaboration,” he said.

Kritenbrink said working together on the issues of the past “builds strategic trust and enables us to further strengthen our forward-looking partnership that advances shared interests and strong people-to-people ties.”

Between 1962 and 1971, the U.S. military sprayed roughly 11 million gallons of Agent Orange across large swaths of southern Vietnam. Dioxin stays in the soil and in the sediment at the bottom of lakes and rivers for generations. It can enter the food supply through the fat of fish and other animals.

Vietnam says as many as 4 million of its citizens were exposed to the herbicide and as many as 3 million have suffered illnesses caused by it—including the children of people who were exposed during the war.

The U.S. Agency for International Development will soon begin a soil restoration project at the base that is estimated to take several years and cost $390 million.