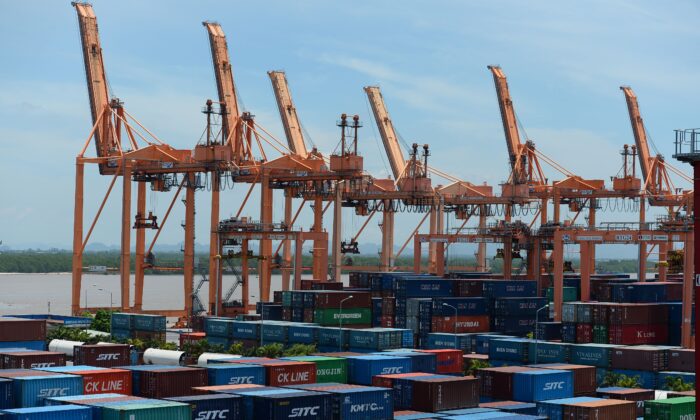 One of the fastest recovering economies in the pandemic, Vietnam’s export growth is pulling away from Shenzhen, China, for a third year, after surpassing it for the first time in 2020.

According to data released on April 8 by Vietnam’s bureau of statistics, the country’s total export value for the first quarter of 2022 rose almost 13 percent to $88.58 billion, indicating Vietnam’s upward trend in exports.

That surpassed China’s strongest city in exports, Shenzhen, by 30 percent. In the first quarter of 2022, Shenzhen’s exports dropped to 407.66 billion yuan ($61.68 billion), down 2.6 percent year-on-year, according to Chinese official data.

Shenzhen is one of the richest cities in China with its exports topping all Chinese cities for decades.

In 2021, exports grew even faster in Vietnam, nearly 9 percent beyond Shenzhen, with $336.25 billion in total exports from Vietnam and $307.2 billion from Shenzhen in exports that year.

Electronic products have taken a prominent place in Vietnam’s export surge: In the first quarter of 2022, the highest export value of $14.2 billion was in cellphones and relevant components; electronics, computers, and relevant components were second with exports at $13.1 billion; followed by exports of machinery manufacturing and equipment products valued at $9.9 billion, ranking third.

The rapid growth of Vietnam’s electronics exports has generated some anxiety and a sense of crisis among Chinese industry insiders, Chinese financial media Yicai said on April 26.

Manufacturing enterprises in China have faced unprecedented challenges since the onset of the pandemic and the ruling Communist Party’s zero-COVID policy.

Shenzhen, a leading global technology hub, had experienced a period of lockdown. Foxconn’s Shenzhen plant was completely shut down on March 14, including its Apple iPhone production line in the Shenzhen Industrial Park. The disruption in production and business operation has led to a decline in the city’s exports.

South Korea’s Samsung and LG, and U.S.-based Intel established their production lines in Vietnam many years ago. In addition, some electronics manufacturers such as Taiwan-based Pegatron Corp. shifted to Vietnam during the pandemic.

In 2021, Samsung Vietnam had a turnover of $74.2 billion, produced half of the world’s Samsung cell phones, and exported to 128 countries and regions, according to Vietnam Investment Review on Jan. 24.

Samsung is the largest foreign investor in Vietnam. In February, Samsung increased its total investment from $18 billion to $19.2 billion by the end of 2021.

Vietnam also boosted its economic and trade ties with Australia as part of a reshuffling of the global supply chain.

In April 2020, the Australian federal government called on the World Health Organization to open an independent international investigation into the origin of COVID-19, which is believed to have started in a laboratory in Wuhan, China, according to The Guardian on April 29.

In response, China took a series of retaliatory actions, such as banning beef imports from four Australian beef plants in May 2020, imposing an 80 percent anti-dumping and countervailing tariff on Australian barley, and unofficially forbidding imports of Australian coal in October of the same year,

In 2021, the total two-way trade between Australia and Vietnam exceeded $12.4 billion, an increase of more than 49 percent over 2020. In the same year, the nations signed a strategic document aimed at strengthening their economic cohesion, including promoting trade and becoming each other’s largest trading partners.

In the first quarter of 2022, Vietnam’s exports to Australia increased by 32.36 percent year-on-year, with coffee up 84 percent, fishery products up 51 percent, and various types of steel up 500 percent. At the same time, Vietnam imported raw materials such as coal, iron ore, metals, and cotton from Australia.

“Vietnam is evolving at a speed that no one can even fathom and quickly surpassing China to becoming the prime destination for manufacturers,” said a 2021 report titled “A Complete Guide of Moving Manufacturing to Vietnam” published by VICO Shipping Co., which was founded in 1990 and engaged in freight forwarding service in Indochina with Vietnam as its business center.

As for the advantages of Vietnam, the report points to the country’s low labor costs (about half that of China), more free trade, fewer restrictions on foreign direct investment, fewer counterfeiting problems, and lower tariffs.

The Hong Kong-based shipping company also indicated in the report that China’s manufacturing sector was hampered by three major factors, including the ongoing effects of the pandemic and supply chain disruptions, less focus on efficiency and cost, and rising labor costs in China.