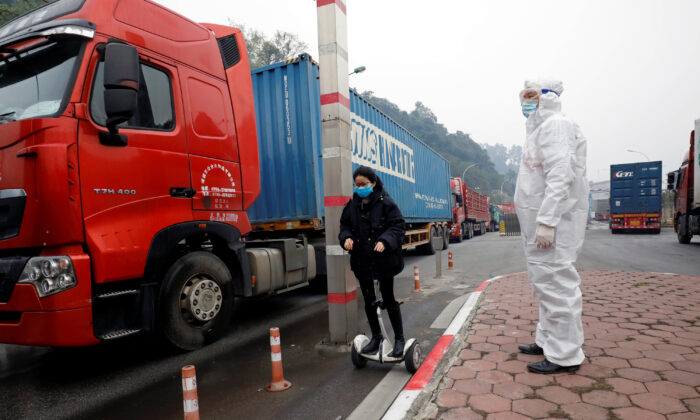 A Vietnamese health worker looks on as a Chinese trader in protective mask rides a hoverboard along container trucks going from China to Vietnam, at Huu Nghi border gate connecting with China, in Lang Son province, Vietnam on Feb. 20, 2020. (Kham/Reuters)
Asia & Pacific

Vietnam’s Ministry of Industry and Trade has called on China to ease border measures, saying that the Chinese regime’s zero COVID-19 policy is “over the top” and has caused cargo congestion at border crossings since early last month.

China has maintained its “zero COVID-19” strategy of mass testing, mass lockdowns, and strict border controls in an attempt to contain the spread of the CCP (Chinese Communist Party) virus, commonly known as the novel coronavirus, within China.

Last month, the Chinese regime imposed a lockdown on Xi’an city and banned residents from leaving their homes following the discovery of a cluster of new infections there. Many residents have complained of hardships just to obtain daily necessities such as food and medication.

China has also imposed restrictions on its export of goods and reduced its customs clearance capacity at the border, with all drivers and customs workers required to wait for COVID-19 test results at border gate areas.

Vietnamese exporters also have been informed that all frozen exports won’t be cleared for 14 days before and after the Lunar New Year holiday, to allow Chinese officers to spend time with their families, Vietnam Net Global reported.

“This disruption has caused a negative impact on bilateral trade and great losses to businesses and people on both sides.”

The ministry reported that 1,555 trucks carrying exports to China were stuck in Vietnam’s Quang Ninh as of Dec. 25, 2021, and 4,204 more were stuck in Lang Son, some of which had been idled at border gates with China for a month.

Guangxi trade officials also have agreed to extend the duration of customs clearance and forward other proposals to higher authorities in order to ease cargo congestion at the border.

China is Vietnam’s largest trading partner and the biggest market for its fruit and vegetables. Trade turnover of agriculture products between the two countries in the first 11 months of 2021 rose 19.5 percent from the same period in 2020, official data shows.