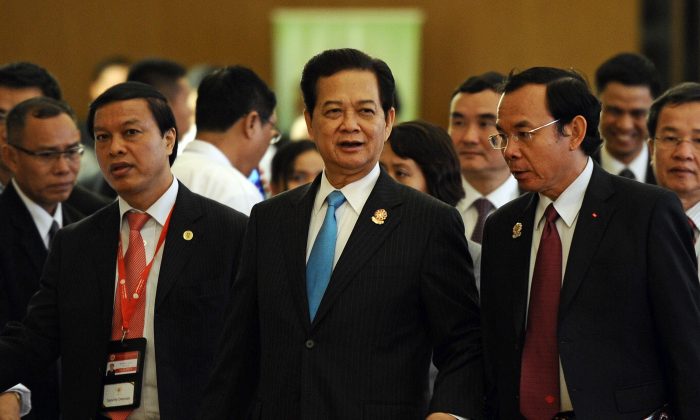 Vietnam's Prime Minister Nguyen Tan Dung (C) walks along with members of his delegation during the ASEAN summit at the Myanmar International Convention Center in Naypyidaw on May 11. On Sunday he criticized China's aggression in the South China Sea. (CHRISTOPHE ARCHAMBAULT/AFP/Getty Images)
China

Vietnamese prime minister Nguyen Tan Dung is pulling no punches in criticizing China’s new deep-water drilling platform in nearby disputed waters. During the plenary session of the Association of Southeast Asian Nations (ASEAN) on Sunday morning, he called out Chinese leaders for threatening peace in the region.

He said China sent deep-water drilling ships into disputed waters near Vietnam, which were escorted by 80 armed vessels and military aircraft. He said the Chinese ships went on a “shooting rampage” with their fire hoses and rammed Vietnamese ships, injuring several passengers onboard.

A Chinese official admitted on Thursday that Chinese ships used water cannons against Vietnamese ships, yet claimed no Chinese navy ships were present, according to AP. Yi Xianliang, China’s deputy director general of the department of boundary and ocean affairs, then accused Vietnamese ships of ramming Chinese ships.

The incident took place on May 4 when Chinese state-run oil company CNOOC began setting up an oil rig 120 nautical miles from Vietnam in waters claimed by both Vietnam and China. Both countries allegedly sent naval ships to the area and Chinese ships allegedly rammed two Vietnamese ships.

A video of the incident was posted online. It shows a Chinese ship with a large fixed gun ramming and chasing a Vietnamese police ship. The video shows one of the injured Vietnamese passengers lying on the ground with a head injury, and a shot of a damaged side of the Vietnamese vessel.

The Chinese ships appear to be from China’s coast guard, yet are armed and were allegedly accompanied by Chinese aircraft.

The day after the incident, China announced it would continue drilling oil in waters near the disputed Paracel Islands in the South China Sea.

Nguyen Tan Dung accused China of violating international law with its deep-water drilling platform, and said China’s actions “were extremely dangerous and a direct threat to the peace, stability, security, and maritime safety in the East Sea [Vietnam’s name for the South China Sea].”

He also called other ASEAN countries, and individuals around the world, to speak out against China’s actions in disputed waters, and to support Vietnam.

Nguyen Tan Dung didn’t leave it at that either. Also on Sunday, posters for a new public awareness campaign were posted to his website, filled with Vietnamese patriotic slogans and images that condemn China. Most are written in Vietnamese. Some in English read “Vietnam Asks for Peace, China answers with war!” and “China, get out of Vietnam waters!”

Vietnamese people rallied against China on Saturday and Sunday.

More than 1,000 people gathered outside the Chinese embassy in Hanoi on Sunday to protest China’s oil rig in nearby disputed waters. According to a military veteran interviewed by AP, the protest was one of Vietnam’s largest ever against the Chinese regime.

The protest followed a similar gathering outside the Chinese Consulate in Ho Chi Minh City. Close to 100 people gathered to protest China’s actions. According to AP, the protests were accompanied by a statement widely circulated on Facebook that says, “Facing the danger of Chinese aggression appropriating the sacred East Sea, the source of livelihood of the Vietnamese over generations, we are determined not to compromise.”