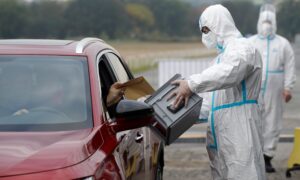 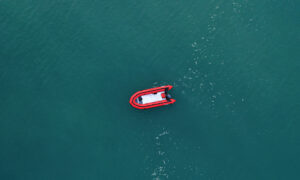 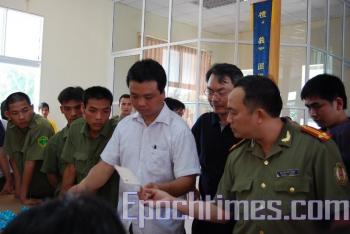 On May 9, Vietnamese communist authorities dispatched dozens of uniformed and plainclothes police officers to interfere with a Falun Gong practitioners' experience-sharing conference in Hanoi, Vietnam. (The Epoch Times)
World

By Zheng Wei
Print
HANOI, Vietnam—Upon arrival in Hanoi, Vietnam, on May 6 to participate in a local Falun Gong experience-sharing conference, 13 Falun Gong practitioners from Taiwan reported being monitored and harassed by the local police. At one point, their vehicle was hijacked. Multiple sources suspected involvement of the Chinese Communist Party (CCP) in the incident.

On the afternoon of May 10, the practitioners safely returned back to Taiwan.

Practitioner Liu said: “We suffered many rights violations in Vietnam. We were monitored 24 hours a day. In the end, we could not continue like that, so we changed our plane tickets that were originally scheduled for May 12 to this morning.”

Attendees also allege that the police continuously interfered with the conference's microphone signal using electric waves. At 2:20 p.m., they forcefully cut the power off.

The questions about the legitimacy of the Vietnamese police's actions were further raised when one of the officers, Troong, told the Taiwanese practitioners: “Do not mention these actions to your police after you go back to Taiwan. If your police asks about it, just say that we only looked at your documents, nothing else.”

At the conclusion of the experience-sharing conference, six Taiwanese practitioners went for a ride with a local practitioner. Several police motorcycles followed them as soon as they exited the door. After driving less than 2 kilometers, the police intercepted them. While the Vietnamese driver got out of the car to submit documents for inspection, one policeman got into the car without saying a word and tried to forcefully drive away with the other passengers.

Mr. Zhang, a Taiwanese practitioner sitting in the car, was able to intervene and shut off the engine. The officer then tried to arrest him, but Zhang broke free and quickly exited the car with the other five practitioners. The police took the Vietnamese driver away along with his vehicle.

The six Taiwanese practitioners were left stranded in the wilderness and had to ask the Taiwan Economic and Cultural Office in Vietnam for help.

“I am particularly grateful to the Taiwan Office. They lent a helping hand when we were harassed and stranded,” Zhang said.

Diplomat: Communications Have Been Monitored

An officer from the Taiwan Economic and Cultural Office in Vietnam said, “A very high level [of the Vietnamese communist government] is involved in this incident.”

When asked if the CCP was behind it, the officer offered no denial.

A diplomat from the Taiwan Economic and Cultural Office told Taiwanese practitioners: “Actually my phone has been tapped all along. Have you not found that each time you called me, the police became more vicious toward you? They knew that you had contacted me.”

The Vietnamese officials have been directed by the CCP to harass Falun Gong practitioners for a long time.

Mr. Fan, a Vietnamese Falun Gong practitioner, said: “The police would frequently search practitioners’ homes, confiscate Falun Gong books and materials, harass and pressure practitioners and their families. They would also arrest practitioners for no reason, taking them away to detention centers and even beat them severely.”

This was Zhang’s first trip to Vietnam. He said he was shocked by the CCP’s infiltration there.

“Through this incident, we see again that the CCP’s basic nature is to use deception, lies, and terror,” he said.

He called upon the people of Taiwan and the international community to recognize the CCP’s harmful nature.