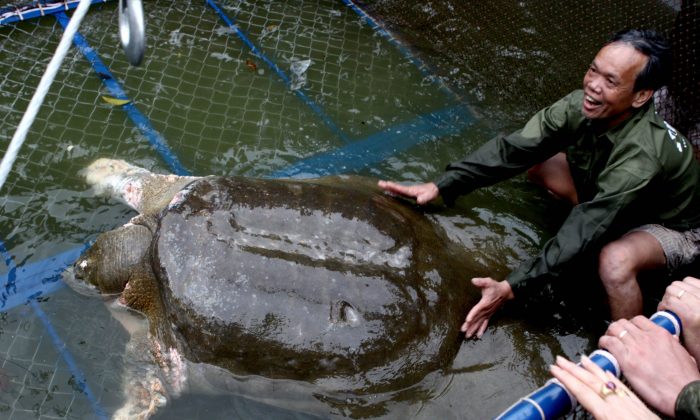 A giant soft-shell turtle (Rafetus swinhoei) which is considered a sacred symbol of Vietnamese independence is guided into a cage for a health check by handlers at Hoan Kiem lake in the heart of Hanoi. Thousands of onlookers cheered in central Hanoi on April 3, 2011 when rescuers captured for treatment the ailing and ancient giant turtle. Legend has it that the turtle is the guardian of a magical sword once used in the 15th century to drive out Chinese invaders. Concern has mounted in recent months over the health of the animal likely to be over 100 years old and one of the last of a critically endangered species -- it is one of only four Rafetus swinhoei turtles known to exist in the world. AFP PHOTO / Vietnam News Agency (Photo credit should read -/AFP/Getty Images)
Asia & Pacific

Vietnamese Giant Softshell Turtle, Only One of Four Left on Earth, Dies in Lake

A giant softshell turtle, described as Vietnam’s “sacred” turtle, was found dead in the country’s Hoan Kiem Lake on Jan. 19, according to media reports.

“It is almost impossible to put into words the significance of this loss,” Peter Pritchard, a turtle researcher who is also founder of the Florida-based Chelonian Research Institute, told National Geographic in a report on Feb. 2.

The BBC reported that there are only three giant Yangtze softshell turtles left in the world now. Two are in a zoo in China, and the other one is in another Vietnamese lake.

The dead specimen weighed more than 400 pounds and could be well over 100 years old.

The turtle was “possibly the rarest species on the planet and definitely the rarest turtle species… It’s a great blow,” that it had died, Tim McCormack with the Asian Turtle Program, told the AFP news agency.

“It was clearly an ancient animal, I would say easily over 100 years old, and so its death does not come as any real great surprise,” he added.

A number of Vietnamese social media users mourned the death of the turtle, known as “Cu Rua.”

“The turtle was a sacred animal for us Hanoians. Such sadness, such regret,” wrote one person.

Another wrote: “So the Hoan Kiem Lake turtle has died. Maybe it is not a sign of bad luck. Maybe it is a sign of renewal and end of slow backwardness.”

The turtle’s body is now being kept in a temple on a small island in the lake. State media outlets said officials are trying to figure out how to proceed, adding that embalming is being considered.