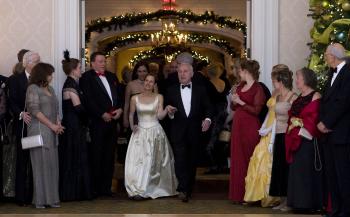 Austrian Ambassador to the United States, Christian Prosl, leads the dignitaries into the ballroom. (Lisa Fan/The Epoch Times)
US

Anna Skibinsky
View profile
Follow
biggersmaller
Print
Where in the United States can one find a near-exact replica of a traditional Viennese ball?

The Viennese Christmas Ball held this month at the Washington Golf and Country in Arlington, Virginia brought a slice of traditional Europe and splendor to the nation’s capital. The ball is the only one in the country that retains the same choreography and opening ceremony of traditional balls in Vienna, said Margaret Bocek, its organizer.

“I try to create a totally cultural experience,” said Bocek.

Christian Prosl, Austrian Ambassador to the United States, joined the festivities. “With these kinds of balls, the D.C. area shows that it’s an international area,” he said.

The ball’s opening ceremony commenced with the traditional Grand March. The salon orchestra of ten musicians played Johann Strauss’ “Radetzky March,” traditionally played at Viennese balls in Europe. Attendees enter the ballroom in a stream of pairs, the ladies escorted on the arms of their gentlemen.

Afterwards, a procession of dignitaries led by Ambassador Prosl entered to a Polonaise.

Finally, lead by “tanzmeisters” (dance masters), Herbert and Carol Traxler, the cotillion of ten young women in white gowns and gloves and their gentlemen partners—in ties and coattails—entered in a line of pairs.

“In Vienna, they are debutants—unmarried women who are being introduced to society. They study dance and are selected to participate in the best balls,” explained Bocek.

When Bocek was growing up, “everybody took some kind of cotillion lessons,” she added.

The cotillion danced six quadrilles to six pieces from “Die Fledermaus,” an opera by Strauss. Quadrilles, choreographed by the tanzmeisters, are performed by four couples where the ladies change partners back and forth in a similar formation to modern square dancing.

To get the word out for participants in the cotillion, Bocek advertised in German-speaking organizations and schools.

“I wanted as many who wanted to learn to participate in the cotillion,” Bocek said.

“We have a young generation that likes to be well dressed, smart and [they] don’t need to misbehave,” said Ambassador Prosl of the young couples in the cotillion. The ambassador said that the procession absolutely resembled the traditional processions in Vienna and was well done.

At last, the ball opened to “Wiener Blut” or “Vienna Bood” by Strauss (of course), selected in honor of Prosl.

Viennese waltz refers both to the style of dance and to the kind of music that accompanies it. The pace is quick and originates from the works of composer Johann Strauss II.

While in Vienna, the balls are multi-activity events that last until 6 a.m., the D.C. ball ended at around midnight.

Adapting the Ball for Youth

In 1998, when Bocek was asked to organize a dance for teenage children of foreign and U.S. diplomats in the D.C. area, her son and his friends found the evening lacking, later telling her that as it was “just another [teenage] dance.”

They had hoped for “more of an adult experience” to transition them into adulthood.

Soon after, Bocek found the tanzmeisters through the Austrian Embassy and in 2001 organized a ball instead. Since then, she has organized a total of 10 balls in the D.C. area, all of which have been open to the public.

When her 15-year-old son learned the Viennese waltz for the cotillion, it changed his expectation for a social event. It became a “wonderful transition into an appropriate adult world,” Bocek said.

According to Bocek, by the end of the 19th Century, there were many ballrooms in D.C. Germanic immigrants brought these traditions with them, but as their cultural traditions faded the ballrooms were lost and the venues held other functions. Many were carpeted for conference rooms. For the D.C. Viennese Ball, a dance floor was brought in and put on top of the carpet at the Country Club.

“We lost this transition socially and culturally,” from a time when grand balls were not only a form of enjoyment in society but for young people served as “a bridge from adolescence into adulthood,” she explained.

It gained the approval of ambassador Prosl. He called the event “one of the most wonderful Viennese balls I have attended, especially in the United States.”

For more information on the Viennese balls in the United States please see
http://www.vienneseball.org/