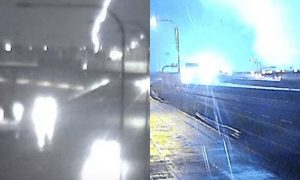 Videos Show Damage by Tornado in Coconut Creek in Florida

A tornado in Florida flipped cars, knocked down trees, and took out power for thousands of area residents.

The tornado, initially classified as EF-1, touched down on January 27 in Coconut Creek.

“Whoa! That is a mini-tornado coming by, ladies and gentlemen,” said one resident, who recorded flying debris near a swimming pool.

WOAH! A 7News viewer sent us this footage of his Coconut Creek backyard that was hit by severe weather due to a #tornado in the area earlier today.

The tornado touched down around 9:30 a.m. near Broward College’s North Campus.

“We heard howling, the wind, we heard the rain just pummeling down,” student Jamie Hill, who was in the school at the time, told WSVN. “We heard a lot of bangs and booms and then heard there were cars on top of each other.”

“We basically watched for a little bit through the window what was going on, cars flying, this car flying on the other,” added student Leonard Ferrera, pointing to a car that toppled onto another.

“Really, really scary situation. Everybody was inside, some people anxious and scared, when we started seeing cars flying around. That was terrifying, like I was watching a Hollywood movie.”

When they say it’s a #tornado #warning we need to #listen. #cars and #trucks flipped over and on top of other cars. Hope no one is #injured. #BrowardCollege #NorthCampus #CoconutCreek #Broward #SouthFlorida

Homeowner Charlie Donahue, whose home is near Coconut Creek Parkway, said the storm flipped over his trampoline and carried a basketball hoop across the street.

Repairman Chip Grunfelder said he had driven to the Pompano Beach Whole Foods bake house when the strong winds buffeted the area. “All the debris was flying around all over the place,” he said. “It was total mayhem. The sky was black … I was scared for my life.”

Pablo Santos of the National Weather Service said the tornado touched down at least three times and was estimated to be 100-feet in width, reported Local10.

Another tornado was spotted in west Broward County near Weston later in the morning, but it did less damage.