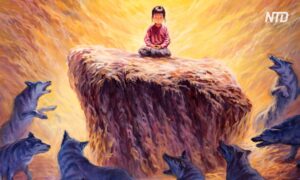 Videos of the Day: Veterans and Dignitaries Gather for 77th Anniversary of Pearl Harbor Attack

Veterans, service members, and dignitaries gathered at Pearl Harbor to mark 77 years since the deadly attack on U.S. forces.

The ceremony began with a moment of silence at 7:55 am local time.

That’s the exact time Japanese warplanes began their assault, which eventually took the lives of more than 2,300 service members.

The attack was the impetus for the United States to join the Allies in World War II.

Japan and the U.S. became close allies after the war ended.

The White House says Project Safe Neighborhoods is the centerpiece of the department’s strategy for reducing violent crime.

The program encourages federal, state, and local law enforcement officials to work together on crime-reduction strategies.

During his remarks, the president repeated comments that he intends to nominate William Barr, former attorney general for President George H.W. Bush, to serve again.

Meng is accused of committing fraud because she told banks in the United States that Huawei and Skycom, a Hong Kong-based company reportedly doing business with Iran, have no connections.

However, the court heard from a crown lawyer that Huawei controls Skycom.

If extradited to the United States, Meng would face charges of conspiracy to defraud multiple financial institutions, with a maximum sentence of 30 years for each charge.

The United States has been looking since at least 2016 into whether Huawei violated U.S. sanctions against Iran.

Meng was arrested in Vancouver on Dec. 1.

The Capitol Christmas tree is now shining in all its glory, with the ceremony having taken place one day later than usual, due to the passing of former President Bush.

Speaker of the House Paul Ryan, was joined by 9-year-old Brigette Harrington of Hillsboro, Oregon, to light the tree on Dec. 6.