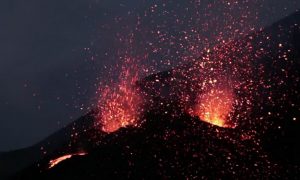 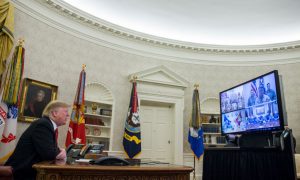 Videos of the Day: President Trump Meets With US Troops in Iraq on Christmas

The trip was not made public until after they landed.

“President Trump and the First Lady traveled to Iraq late on Christmas night to visit with our troops and Senior Military leadership to thank them for their service, their success, and their sacrifice and to wish them a Merry Christmas,” White House press secretary Sarah Sanders said in a statement.

She shared a picture of the president and first lady posing with troops.

Sales in the 2018 U.S. holiday shopping season rose 5.1 percent to over $850 billion, the strongest in six years, according to a Mastercard report on Dec. 26, as shoppers were encouraged by a robust economy and early discounts.
The data follows Amazon.com Inc’s announcement of a “record-breaking” selling season, with the online retail giant shipping a billion items for free through its Prime membership in the United States.

A huge plume of smoke continued to rise from Mount Etna on Dec. 26, after an earthquake with a magnitude of 4.8 hit an area north of Catania, damaging buildings and injuring about 30 people.

The earthquake occurred two days after Europe’s highest and most active volcano erupted, sending a huge column of ash into the sky and causing the temporary closure of Catania airport on Sicily’s eastern coast.