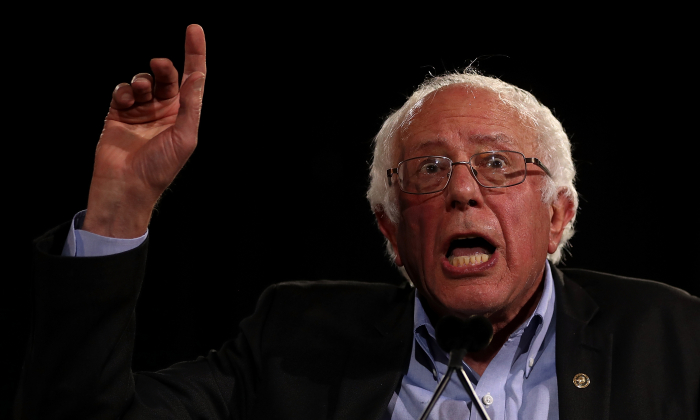 A new video has emerged of Sen. Bernie Sanders (I-Vt.) praising communist dictator Fidel Castro and the Cuban revolution. The video, posted on Twitter on Feb. 21 by a group known as the “Reagan Battalion,” is the latest in a recent series highlighting Sanders’ affinity for communism.

“I remember being very excited when Fidel Castro made the revolution in Cuba,” Sanders, who is now a 2020 presidential candidate, said. “I remember reading that it seemed right and appropriate that poor people were rising up against rather ugly rich people.”

The video was recorded at the University of Vermont in 1986, and shows Sanders speaking to an audience from behind a podium. He recounted the 1960 presidential debate between John F. Kennedy and Richard Nixon with disgust.

“At the time, I was very excited and impressed by the Cuban revolution, and there was Kennedy and Nixon talking about which particular method they should use about destroying the revolution,” Sanders said.

Video: @BernieSanders, University of Vermont, 1986, recalls his excitement watching Castro’s revolution “rising up against the ugly rich people.” & his sick feeling watching JFK speak out against communism in Cuba.

Also bashes the @nytimes for lying about communism. pic.twitter.com/OUqzLFbsvz

“I actually got up from the room and almost left to puke,” he said.

The Reagan Battalion is named after President Ronald Reagan, who was a fierce opponent of communism. Reagan is widely credited with winning the Cold War against the Soviet Union.

The group is also critical of President Donald Trump for his perceived departure from Reagan-era conservativism, a division that elements of the news media have exploited.

On Feb. 22, a full day after its posting, the Reagan Battalion account posted on Twitter that, “Not a single MSM ‘journalist’ retweeted this video of @BernieSanders describing how he felt like ’puking’ when he heard President JFK bashing communism. The same reporters who were excited to retweet every anti-Trump video we ever tweeted have suddenly disappeared.”

Another video, posted Feb. 19, shows Sanders again praising Castro, and admitting that he traveled to Nicaragua to advise the Soviet-backed Daniel Ortega regime on how to successfully thwart the United States.

🚨Uncovered video🚨@BernieSanders in 1985 praising the Communist Castro regime in Cuba and admitting on camera that he traveled to Nicaragua to advise the Ortega regime on how to successfully fight the United States. pic.twitter.com/qYtpvbVvCS

In a sit-down interview from 1985, Sanders says, “As a socialist, the word socialism does not frighten me.”

“You may recall back in 1961, they invaded Cuba, and everybody was totally convinced that Castro was the worst guy in the world,” he said. “They forgot that he educated kids, gave them health care, and totally transformed society.”

But for the vast majority, that transformation turned the island nation into a prison, where political dissent was outlawed and untold human-rights abuses occurred.

Five years before Sanders’s 1985 comments, approximately 10,000 Cuban political refugees emigrated to the United States in what became known as the Mariel boatlift—an event that still resonates with the South Florida Cuban community.

Many less fortunate Cubans have attempted to escape the island on makeshift boats and rafts, often unsuccessfully.

In a separate video clip that was also filmed in 1985, Sanders appears to champion the leftist Sandinistas of Nicaragua while blasting his native United States.

Video: At the invitation of the communist regime in Nicaragua, @BernieSanders speaks at the 7th anniversary of the Sandinista Revolution in 1985, where he bashes “150 years” of American imperialism, & defends the Communist regimes in Latin America who are just trying to do good. pic.twitter.com/tJ84oMytSB

Sanders continued his Marxist critique by saying that from the American perspective, “countries which attempt to stand up and do things for their own people rather than American corporations are not to be tolerated.”

According to the Reagan Battalion, Sanders had been invited to speak by the communist government in Nicaragua in observance of the seventh anniversary of the Sandinista Revolution.

In yet another video, Sanders praises the Soviet Union after returning from the Cold War superpower with his wife, Jane, in 1988.

“I was impressed by the youth programs that they have. They are palaces of culture for young people—a whole variety of programs for young people and cultural programs which go far beyond what we do in this country,” he said.

Jane Sanders then remarks that she was “astounded with the openness, the optimism, and the enthusiasm of the nation.”

“Instead of compartmentalizing their lives into a job and hobbies, it’s all interrelated. It’s all under the banner of community,” she said.

A video from the same 1988 trip has circulated online since at least January in which a shirtless Bernie Sanders appears to be drunkenly singing at a crowded table in Yaroslavl, just outside of Moscow.

Sanders’s support of communism and socialism continues today. He recently refused to call on Venezuelan socialist dictator Nicolas Maduro to step down and wouldn’t acknowledge the legitimacy of Juan Guaido, the leader who is recognized by more than 50 free-world nations including the United States. In his refusal, Sanders aligned himself with a handful of current and former communist regimes backing Maduro, including China, North Korea, Cuba, and Russia.

Although Sanders isn’t a member of the Democratic Party, he caucuses with the Democrats. In 2016, he ran for president but lost a controversial primary election to Hillary Clinton, but not before winning 23 states, 1,865 delegates, and 13.2 million votes.

In 1991, Sanders co-founded the Congressional Progressive Caucus, which now controls around 40 percent of the Democratic Party in the House of Representatives.

Sanders announced his 2020 presidential campaign on Feb. 19, and said in an email to supporters, “Our campaign is about creating a government and economy that works for the many, not just the few.” His platform includes socialist policies like “Medicare for All,” free college tuition, the $15 minimum wage, and the “Green New Deal.”

The policies, if implemented as proposed, would enable massive government expansion and heavy taxation. By one estimate, “Medicare for All” alone would cost $3.26 trillion per year, or 74 percent of the entire current U.S. budget. The cost of the “Green New Deal” is so prohibitive that its sponsor, socialist Rep. Alexandria Ocasio-Cortez (D-N.Y.), has suggested printing money to foot the bill.

Trump is a vehement opponent of socialism and communism. Shortly after Sanders announced his 2020 bid, Trump was quick to point out that Sanders is a socialist.

“Bernie Sanders has already won the debate in the Democrat primary, because every candidate is embracing his brand of socialism,” said Kayleigh McEnany, the Trump campaign spokeswoman. “But the American people will reject an agenda of sky-high tax rates, government-run health care, and coddling dictators like those in Venezuela. Only President Trump will keep America free, prosperous and safe.”