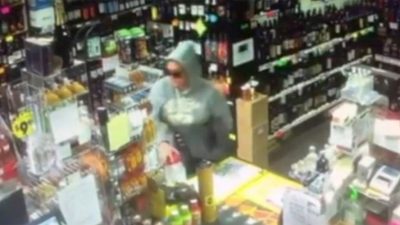 Officials in Connecticut are asking for assistance catching a woman who was seen on camera swiping a donation jar at a liquor store.

The incident took place Thursday, Nov. 16, according to Fox61.

Footage shows the woman, wearing a gray hoodie and sunglasses, enter East Haven Discount Wine and Liquors at a little before 4 p.m. She briefly looks around before taking the jar and leaving the store.

The store’s owner told police that the donation jar was set up to raise money for cancer research.

“The people at Smilow [Cancer Hospital] took care of me like my own family,” said Hiten Patel, the owner East Haven Discount Wine and Liquors, WFSB-TV reported. Patel said he vowed to donate to the hospital as often as he could after was treated for cancer there.

He added: “Seeing those little kids with cancer just broke me down one day when I was on the floor. So I said I’m going to pay it back.”

“Because people give them from their heart, and even if they don’t have the money, they’ll donate $.50 or a dollar just to be part of it,” he said.

The East Haven Police Department asked for anyone with information to message them. “We are asking for the public’s help in identifying this female. Anyone who may recognize her is encouraged to contact us at 203-468-3820 or reach out to us on our East Haven Police Department Facebook page inbox. All calls or messages will remain anonymous,” Police Lt. Joseph M. Murgo said, Patch.com reported.

Patel planned to match every dollar from the donation jar with his own money before the end of the year, reported WSFB.

“If she would’ve asked me for money I would’ve gave it to her,” Patel said. “Taking that kind of money from somebody—and it’s going to a good cause—that’s what bothered me, and I couldn’t sleep that night.”

We have a small favor to ask of you. More people are reading The Epoch Times than ever, but ad revenues are plummeting across media websites. If you can, please share this article on Facebook so you can help The Epoch Times . It takes less than a minute. Thank you very much!