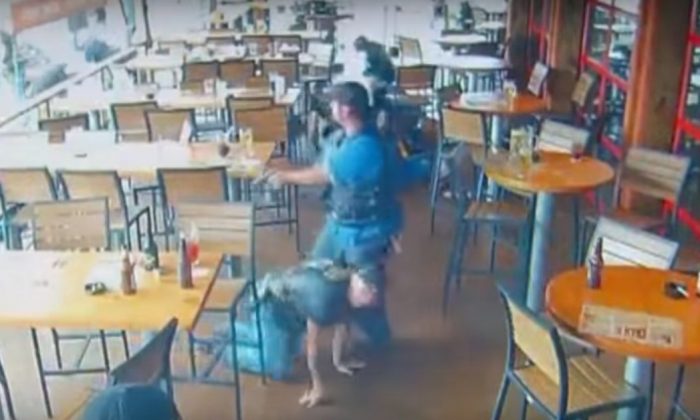 Surveillance footage of the shootout at the Twin Peaks bar in Waco, Texas. The biker shootout left nine bikers dead and 20 injured on May 17. (Screenshot)
US

Surveillance footage of the shootout at the Twin Peaks bar in Waco, Texas. The biker shootout left nine bikers dead and 20 injured on May 17.

The video shows gang members shooting off their firearms and taking cover inside the restaurant.

Two biker gangs–or what officials say are “outlaw motorcycle clubs”–were involved in the shooting. The perpetrators, specifically, were Bandidos and the Cossacks. They accused each other for the events that took place.

In the aftermath of the fracas, a police officer asked how many of the bikers were armed. “I asked anybody who had a gun to raise their hand,” Waco Officer Ryan Holt wrote in a police report that was obtained by CNN. He said that nearly every biker was armed.

Overall, 480 weapons, including 151 guns, were recovered and 177 were arrested. The shootout erupted in the parking lot of the restaurant. Those arrested were charged with taking part in organized criminal activity.

In a statement sent to Breitbart News, the Waco Police Department denied that either the department or the McLennan County District Attorney’s Office released the video or photographs to CNN or any other media outlet.

The statement from Sergeant Patrick Swanton of Waco Police Department told the website: “CNN has stated that ‘they’ put the Waco Police Department graphic at the top of the video which indicated we released it. Again, we did not. They have now removed that graphic as the video is not attributed to us and CNN is in the process of updating their sites. There is a small pool of individuals that include defense attorneys who had access to the information through discovery. The party responsible for providing the released video and photographs may be subject to ethical and legal issues for doing so.”

The police department, prosecutors, and defense lawyers in the case were placed under a gag order.