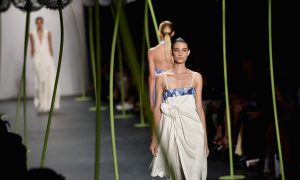 Video: Vending Machine Was Selling T-Shirts for Only $2, But Nobody Was Buying Them

A vending machine in Berlin, Germany was set up to sell t-shirts for two euros (about $2.20), but no one wanted to buy them.

Why not? That sounds like a pretty good deal.

Well, like most things that sound too good to be true, there was a catch. The machine was set up by a nonprofit called Fashion Revolution as a social experiment.

Customers could indeed get a real shirt for just two bucks, but they first had to watch a video about the sweatshop workers who work for so little to produce those same t-shirts. That’s how most clothing is so cheap, after all.

The video introduces the would-be consumers to individual people that work for low pay–as little as 13 cents an hour–while working many hours–as many as 14 a day.

The shocked passers-by, after watching the video, had a choice to make. Did they still want the cheap shirt? Or would they rather donate money to the nonprofit to try to help fight the current fashion system? The people in the video all chose to donate.