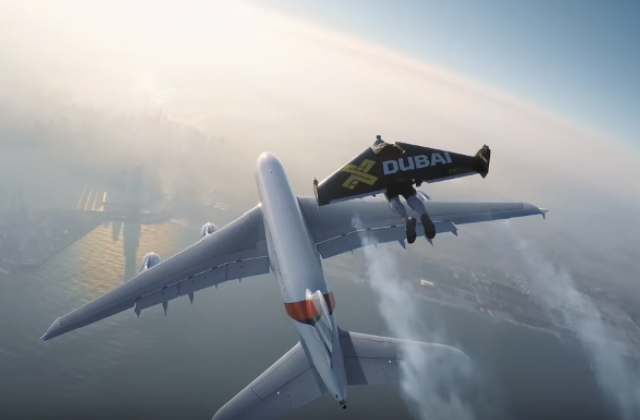 VIDEO: Two Guys Fly Jetpacks Next to a Plane in Dubai

Two men wearing jetpacks flew alongside an Airbus A380 passenger plane over Dubai, and it was captured on video.

“A carefully choreographed aerial showcase, conducted over the Palm Jumeirah and Dubai skyline, involving the world’s largest passenger aircraft and the experienced Jetman Dubai pilots Yves Rossy and Vince Reffet,” a statement from XDubai reads. “Over the last three months, Emirates and the Jetman Dubai teams worked closely to diligently plan and coordinate every detail of this project.”

Previously, the two have used their custom jetpacks flying next to a B17 bomber and over the Grand Canyon in Arizona.

The video is actually an ad for Dubai’s Emirates airline.

The idea was initially met with skepticism.

“We’re looking at a human being that has a Kevlar wing strapped to their body, with four engines, flying in close proximity to an aircraft that is absolutely enormous,” said Michael Rudolph, the chief of aviation regulations and safety for the Dubai Civil Aviation Authority, according to the Stuff.co.nz news website.

Gareth Lloyd Evans, flight operations manager, added the idea was simply “madness,” but added that when they “worked through the process, identified the risks and all the mitigations, it became more of a challenge and opportunity to show our skills.”

A few days later, another man wearing a jetpack flew around the Statue of Liberty in New York City.