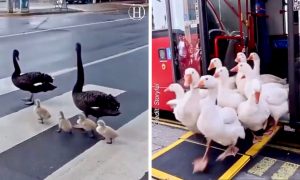 Video: This Daddy Swan Teaches His Child a Lesson in Patience and We Could All Learn From It

Patience is something we can all use with a little bit more of. Whether it is waiting in the line at the supermarket, or being stuck in traffic. Waiting is something that is known to make the average human go red with anger.

However, a father swan decided that it was her job to teach one of her ducklings patience at an early age. While the mother swan was able to make it out of the pond easily, the babies did not have such a good time.

However, before long, one of the chicks finds out how to get out of the pond, and climbs on a rock in order to get out. After observing their sibling get out, the other ones started to do the same. One by one, they were all able to make it out, and head over to mother swan.

Yet, one of them had an issue. The chick tried and it tried, but kept slipping and falling back into the water. The father swan sat next to his child, gently nudging his young child towards the exit, persuading the young chick to be able to make it out.

After several more failed attempts, the baby swan was finally able to make it out of the pond, and waddle on over to the nest with its brothers and sisters. The father was supportive, right there by his side as the chick made it out.

This goes to show that we can all use a little more patience in our lives. Just like how this father swan was able to wait until his child learned how to be able to exit the pond by itself, we also need learn to be calm, and wait for many things to happen without seeking to rush everything.