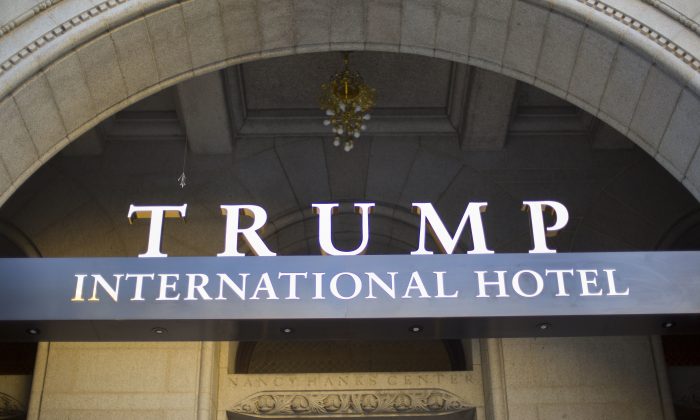 The Trump International Hotel in Washington, owned by former President Donald Trump, posted a video last week that showed the lobby of the facility serving as a rest area for police officers on Inauguration Day.

“A heart full of gratitude to all our law enforcement officers … Enjoy America’s Living Room and great having you all with us … @DCPoliceDept,” Mickael Damelincourt, the managing director for Trump International Hotel, wrote in a tweet on Jan. 20.

In the video, the camera pans across an area of the hotel, where some two dozen officers and sheriff’s deputies are seen taking a break from their duties.

A heart full of gratitude to all our law enforcement officers…Enjoy America’s Living Room and great having you all with us… @DCPoliceDept pic.twitter.com/HxofXMiEkl

The footage offers a contrast to the flurry of images and video shared on social media that same week, showing National Guard troops who were relegated to a parking garage after being asked to leave parts of the U.S. Capitol after providing security around the inauguration, drawing condemnation from lawmakers.

Sen. Bill Cassidy (R-La.) wrote in a tweet that “it is completely unacceptable that our brave National Guard troops be treated this way. This must be fixed immediately.”

Officials announced Friday the troops had been allowed back into the Capitol complex.

“I want to assure everyone that, with the exception of specific times on Inauguration Day itself while the swearing-in ceremonies were underway, the United States Capitol police did not instruct the National Guard to vacate the Capitol Building facilities,” Acting Capitol Police Chief Yogananda Pittman said on the department’s website. “And on Inauguration Day, the Guard was notified and encouraged to reoccupy the spaces in the Capitol and CVC at 2 p.m.”

Pittman added, “It was brought to our attention early today that facility management with the Thurgood Marshall Judicial Office Building reached out directly to the National Guard to offer use of its facilities.”

It came after the National Guard on Friday said the U.S. Capitol Police ordered its troops to move its break area from inside the Capitol to a nearby parking garage.

“As Congress is in session and increased foot traffic and business is being conducted, Capitol Police asked the troops to move their rest area,” the D.C. National Guard said in a statement. “They were temporarily relocated to the Thurgood Marshall Judicial Center garage with heat and restroom facilities.”

Thousands of National Guard members were deployed in Washington after a group of people breached the Capitol building on Jan. 6 during the Joint Session of Congress.