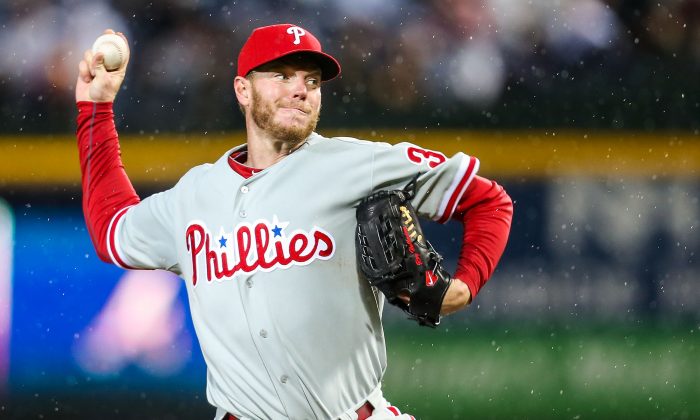 Former MLB pitcher Roy Halladay was seen flying dangerously low in his ICON A5 aircraft just days before he crashed into the Gulf of Mexico on Nov. 7 and died.

“That’s low, pretty neat. I would have never thought they’d be able to fly low like that,” a man can be heard in a video recording of Halladay’s plane. “That’s almost like interaction with the boat level. That doesn’t look good … Man, that’s crazy low. That’s crazy.”

TMZ reported this week that the 40-year-old former pitcher had been “flying like that all week,” according to a witness and “aggressively.”

Halladay had been a licensed pilot since 2013, National Transportation Safety Board Investigator Noreen Price told AP.

“He was widely respected by those who knew him in the aviation community for his hard work, attention to detail and dedication to safety while flying,” a statement from his family reads.

The National Transportation Safety Board is now investigating the cause of the crash.

Roy Halladay among 1st to fly model of plane he died in; plane's chief designer also died in 2017 while flying one https://t.co/47pmAAszwt pic.twitter.com/OU4chV4vTq

“It looked like a high-energy impact,” investigator Price, said in a news conference, according to the New York Post. “All the pieces were there. Most everything was attached.”

“Our family is heartbroken in confirming that Roy passed away in a plane crash Tuesday afternoon. While many will remember him for his success as a major league pitcher, we remember him as an amazing father, loving husband and loyal friend.

Roy had many accomplishments in his professional career, the memories of which we will cherish forever. He described each achievement as a team effort rather than an individual accomplishment, a true testament to his character and love for his teammates.

Roy grew up with a passion for planes and always had the goal of becoming a pilot. Since retiring from baseball, he has been actively studying, accumulating the required flight hours and obtaining multiple pilot certifications and licenses. Just as he was known for his work ethic in baseball, he was also widely respected by those who knew him in the aviation community for his hard work, attention to detail and dedication to safety while flying. He treated his passion for aviation with the same joy and enthusiasm as he did his love for baseball.

That passion was also expressed through his tireless dedication to helping his own children and so many others learn to love and respect the game of baseball. He was an amazing coach for many youth teams, always showing patience and encouragement while reminding each child that they all had a role to play, a way to contribute and add value to their team. His love for the game had no boundaries as we often saw him instructing and encouraging the players on opposing teams. Roy was selfless in every aspect of his life.

While we mourn the loss of the core of our family, we choose to celebrate him and remember the man we knew privately on and off the field. We hope that he serves as an example of professionalism, integrity and hard work for all who knew him. For us, we will forever remember his unconditional love, humility and the sacrifices he made to provide for the family that meant the world to him.

On behalf of our family we thank you for respecting our privacy during this time of overwhelming grief. We also ask that you respect the privacy of our extended family as well as the families and children who Roy has coached, taught or worked with. We are so fortunate and thankful for the outpouring of love and support we’ve received from across the world.

A celebration of life will be held on Tuesday, November 14, 2017 at 4:00 p.m. at Spectrum Field in Clearwater, Florida. The service will be open to the public.