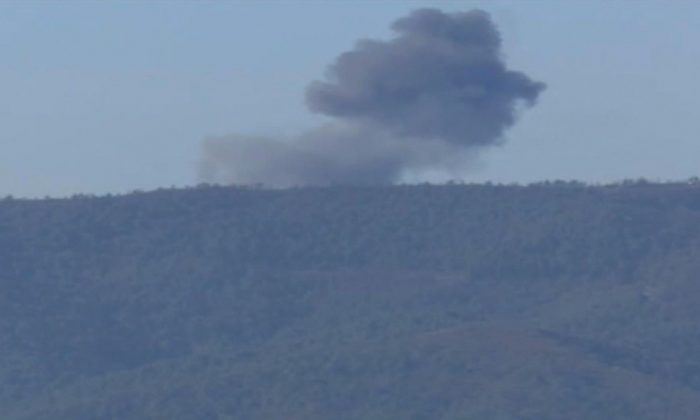 This frame grab from video by Haberturk TV, shows smoke from a Russian warplane after crashing on a hill as seen from Hatay province, Turkey, Tuesday, Nov. 24, 2015. Turkey shot down the Russian warplane Tuesday, claiming it had violated Turkish airspace and ignored repeated warnings. Russia denied that the plane crossed the Syrian border into Turkish skies. (Haberturk TV via AP) TURKEY OUT
Middle East

The helicopters were on a mission to rescue the pilots of the downed Russian plane shot down near the Syria-Turkey border earlier in the week.

According to state-funded RT, footage shows one of the helicopters crash landing. The crew is eventually rescued from the area.

The whole incident was caught on camera by ANNA-News, who were in the area by the downed plane.

RT reported that two of its journalists and a TASS journalist, who were injured when an anti-tank shell hit their convoy by the Turkish-Syrian border, have arrived in Moscow.

“I still have ringing in my ear. I can’t hear with my left ear very well but it’s getting better,” Roman Kosarev said.

“The explosion was quite loud and we suffered concussion,” said Kosarev, “We were clearly marked as journalists. We were wearing blue helmets, blue jackets …and were clearly visible from the opposite side when they were shooting at us.”

On Thursday, Turkish Prime Minister Recep Tayyip Erdogan said he won’t apologize for the downing of the Russian plane.

“I think if there is a party that needs to apologize, it is not us,” he said, reported CNN. “Those who violated our airspace are the ones who need to apologize. Our pilots and our armed forces, they simply fulfilled their duties, which consisted of responding to … violations of the rules of engagement. I think this is the essence.”

Erdogan had accused his counterpart, Russian President Vladimir Putin, of deceit. Moscow then announced it would deploy anti-aircraft missiles in Syria.

But Russian Foreign Minister Sergey Lavrov expressed “serious doubts” that Turkey’s downing of the plane near the border region was spur of the moment.

“It looks very much like a planned provocation,” Lavrov said.