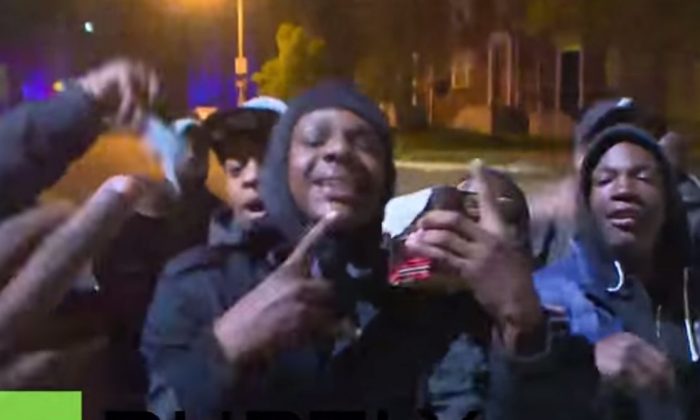 A female reporter with RT got a first-hand taste of the protests in Baltimore over the death of Freddie Gray, who suffered a fatal spine injury in police custody.

A gang of youths came up to the reporter, Paulina Leonovich, who was there reporting live on the protests, as seen below (Warning – contains lots of profanity):

The youths then surrounded her, shouting slogans about “Freddie G,” referring to Gray. One of them then stole her handbag and ran off before he was stopped by police officers.

“Give it back… give me back my bag!” she says before the officer intervenes. Leonovich can also be heard crying later in the footage before it cuts off.

On Monday, the protests took an especially ugly turn and have essentially devolved into riots. Rioters were seen throwing rocks and other objects at riot police officers. Several cars and buildings were also set on fire and looted.

According to the Baltimore Sun, looters went after Mondawmin Mall and a Save-A-Lot and Rite Aid in Bolton Hill.

At least seven police officers were injured in clashes that started at around 3 p.m. local time near the mall.

“Today’s looting and acts of violence in Baltimore will not be tolerated,” he wrote in a statement

He added: “I strongly condemn the actions of the offenders who are engaged in direct attacks against innocent civilians, businesses and law enforcement officers. There is a significant difference between protesting and violence and those committing these acts will be prosecuted under the fullest extent of the law.”