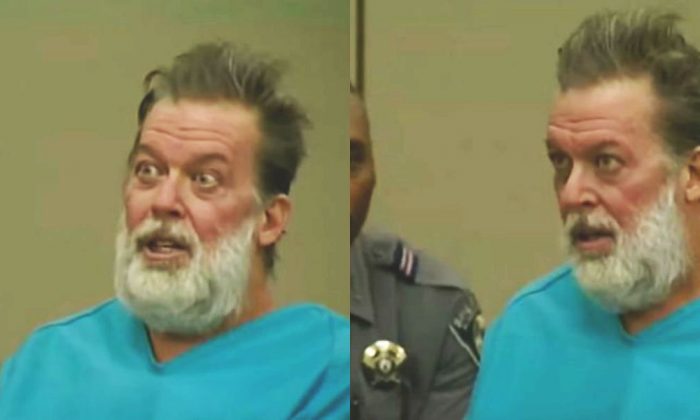 The man who allegedly shot and killed three people at a Planned Parenthood clinic in Colorado Springs, Colorado, spoke in court on Wednesday.

Appearing wide-eyed and defiant, Robert Lewis Dear said he’s guilty, but is a “warrior for the babies,” according to video footage of the hearing. A video of his outburst can be seen here:

Dear surrendered to police after a several-hour-long standoff. He was in court on Wednesday to be charged with the killings.

In court, Dear was apparently opposed to the efforts carried out by public defenders.

Dear shouted: “You’ll never know what I saw in that clinic. Atrocities. The babies. That’s what they want to seal.”

He was opposed to his public defender Daniel King, one of the lawyers who represented Aurora movie theater shooter James Holmes. King said that he has “serious concerns” about Dear’s competency.

“Do you know who this lawyer is? He’s the lawyer for the Batman shooter that drugged him all up and that’s what they want to do to me,” Dear said, referring to Holmes, who shot and killed 12 people and was apparently a fan of superhero Batman.

The Denver Post has a transcript of Dear interrupting his own lawyer:

King requested that the judge order prompt discovery in the case so the defense team can learn “the depth of Mr. Dear’s mental illness.”

Dear interrupted, “You’re not my lawyer.”

King told the judge the sharing of evidence was vital. “It’s rather ironic that prosecutors have not disclosed one piece of evidence,” he started.

King told the judge “I think the problem is obvious, your honor.”

Here’s a full video of the court proceeds on Wednesday, Dec. 9: