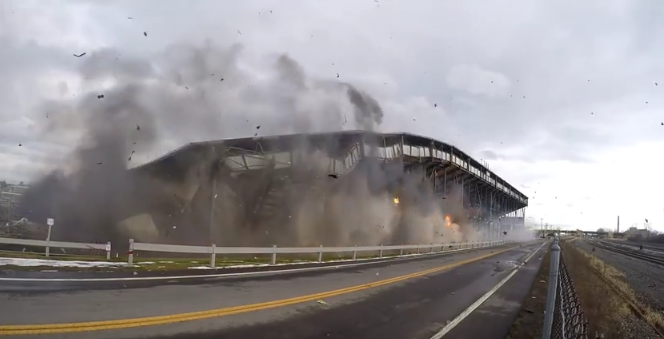 A huge implosion flattened the grandstand at the New York State Fairgrounds on Saturday in Geddes.

The implosion was set off by Governor Andrew Cuomo.

The plan is for the area to be re-done. Features include a new Chevy Court, formal spaces for RV camping, and a larger Midway.

People who attended the implosion in person, and those who discussed it online, are sharing their memories of the grandstand.

“Back in 1993, I had the brainstorm to use my demolition derby car as a means to propose to my wife, Bonnie,” Greg Miller told WSYR.

He ended up arranging the proposal on a vehicle, that his wife saw when it passed by.

Linda Haig recalled a memorable event on Facebook. “Seeing Shania Twain in a thunder and lightening storm with water almost up to our knees after!” she said.

Not everyone was pleased with the plans for change, though, with some Cuomo and the other elected officials ruined a piece of state history. The grandstand was nearly 40 years old.

When Cuomo pushed the button, 268 explosives placed at 260 different locations were set off, reported Syracuse.com.

Cuomo said the state fair is a great institution, but parts of it were “not competitive anymore.”

“The truth is it needs advancement,” he said. “It has not had the kind of investment it should have had over the years.”