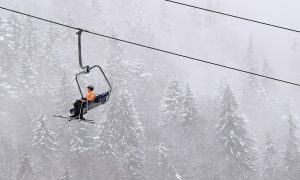 The shocking moment a hit-and-run driver crashed into an Audi has been caught on film, showing the car flying into the air in Florida, on Feb. 28, 2019.

A surveillance camera captured the moment a silver Kia Sedona crossed three lanes of traffic to make a left turn in Manatee County but without seeming to notice the Audi coming head-on. The teen driver spots the van and tries swerve out of the way but the Sedona clips the Audi and the impact sends it flipping over at least four times.

The trajectory of the car caused it to hit a parked car and skid across a concrete wall before coming to a complete stop upside down on top of a gate, surrounding a pool at a hotel.

The Florida teenage driver survived but remains in a critical condition.

HIT-AND-RUN ROLLOVER: Police in Florida are looking for the driver who caused this dramatic wreck, critically injuring a 19-year-old man – https://t.co/G01008EQQf #HTownRush pic.twitter.com/fi8UPiHXMq

“People were hollering [to] call 911 and it was just a bit of chaos at first,” a nearby hotel guest Kathy Brown told WFTS.

“[It was] so bad, I didn’t know what to do until somebody came with an ambulance, only thing we had to wait on,” Donald Fuchs, another witness, said. “He was bruised-up pretty bad.”

Fuchs knew something was wrong when he heard a loud bang from his hotel room. “It sounded like a big bomb went off,” he told Fox 13.

He ran outside to see what had happened, saw the car and quickly helped the driver out of the wreck.

“I wanted to make sure he was all right, get him out of there before it caught on fire or anything,” he said.

The driver of the Audi was rushed to the hospital and later identified as Jackson Maxwell Kelly, 19.

No other injuries have been reported at the crash site.

“We have a lot of children who come, who stay here on the weekends,” said Linda Voss, who works at the nearby hotel. “The parking lot could be crowded with kids. Luckily, it happened early enough where there was no one out there.”

The driver of the Sedona sped away without leaving any personal details, making the horrible crash even more devastating for the family. Law enforcement officers have begun searching for the other driver.

Friends and family of Kelly, meanwhile, launched a GoFundMe campaign to help the victim recover.

“Jack Kelley was a victim of a hit and run that resulted in him being in critical condition. He has gone through surgery and is in ICU at the moment,” a concerned friend wrote.

“All money will go to his family to help in medical expense[s] and aid in his recovery. Thank you for all the thoughts and prayers.”

Kelley had been attending Florida Gateway College after graduating from high school.

This is one of my son’s best friends, Jack Kelley. He is the son of Mike Kelley. He was involved in a horrific hit and…

The Florida Department of Transportation said in October 2018 there were 37,133 deaths from motor vehicle crashes in 2017, representing a decrease of almost 2 percent compared to the total for 2016. In comparison, the number of deaths increased about 6.5 percent between 2015 and 2016, and also 8 percent from 2014 to 2015. Pedestrian fatalities fell by about 2 percent. Although deaths in both categories decreased, officials said more can be done to prevent them.

“Dangerous actions such as speeding, distracted driving, and driving under the influence are still putting many Americans, their families and those they share the road with at risk,” National Highway Traffic Safety Administration Deputy Administrator Heidi King said in a statement.

“Additionally, we must address the emerging trend of drug-impaired driving to ensure we are reducing traffic fatalities and keeping our roadways safe for the traveling public.”