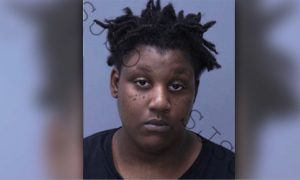 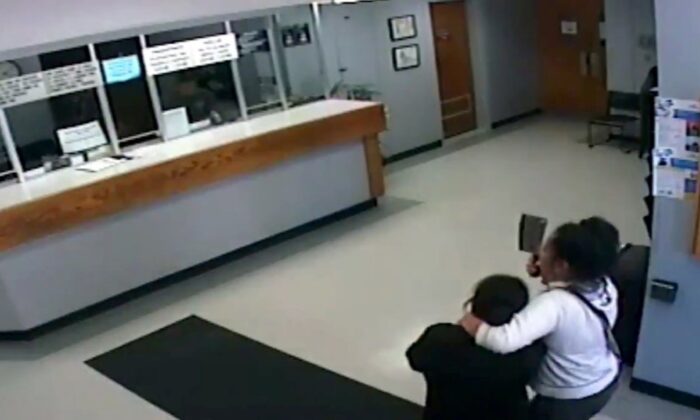 The Salinas Police Department in California shared a surveillance clip on Twitter which shows the moment 22-year-old Mariel Capulong on Sept. 25 took a 43-year-old woman hostage, with one arm around her neck while wielding a cleaver with her right hand at the Lincoln Avenue building.

The video shows the victim talking to an officer at the lobby’s front desk before leaving. The 43-year-old is then seen on camera reentering while being held in a headlock by Capulong.

Capulong, dressed in a white hoodie and her hair tied up, escorts the victim back inside the lobby brandishing a meat cleaver, before forcing her sit on a chair which isn’t visible on camera. Police added that at this point, the victim was still very near Capulong and was in danger.

As soon as officers heard there was a hostage situation in the lobby, they rushed out, Roberto Filice, assistant chief of police told The Californian.

“As soon as that went out, we rushed to the lobby,” he said.

As Capulong comes back into the frame, raising the cleaver, six uniformed officers then rush into the lobby with stun guns and firearms drawn, demanding the 22-year-old drop her weapon while keeping her at gunpoint.

One officer deescalates and takes out his stun gun while the group move in closer to Capulong. One officer uses his stun gun on the 22-year-old, incapacitating her, and the victim is able to escape.

Police said officers stood between Capulong and the 43-year-old woman to create a safe distance, before escorting the uninjured victim out of the lobby.

Capulong was then handcuffed and taken into custody at Monterey County Jail with minor injuries. She was arrested at around 4:10 p.m. on suspicion of kidnapping, false imprisonment, and assault with a deadly weapon, Salinas Police Chief Adele Fresé told the news outlet.

“There was no conversation, no warning,” Fresé said. “This person just walked in and grabbed ahold of an independent woman who was exiting the lobby of our police station.”

The ordeal was over in under two minutes, and the officers displayed “great deescalation tactics,” Filice said.

Filice added that it was fortunate the incident took place just before a shift change at the office, which meant there were “a number of officers in the police department able to respond.”

The armed woman was unknown to police officers at the time and it is thought that the two women do not know each other. The motive behind the attack is unclear at this time.

In a statement, the Salinas Police Department said it is “proud of our officers for using their training, experience, and sound tactics to deescalate a tense, volatile, and rapidly evolving violent encounter.”