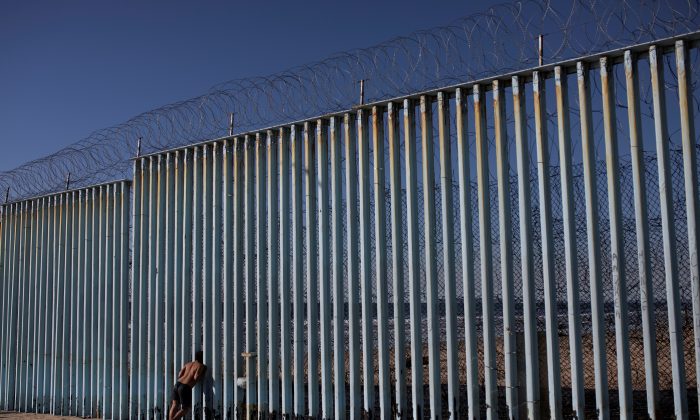 A migrant from Honduras looks through the border wall on the beach of Tijuana, Mexico, on Dec. 3, 2018. (Alkis Konstantinidis/Reuters)
By Zachary Stieber

New video footage from the U.S.-Mexico border shows a toddler falling during a climb over the border wall.

The fall came while a group of illegal aliens scaled a section of the 18-foot wall using a ladder.

Some 49 illegal aliens scaled the wall in Arizona on Jan. 27 using the ladder, which was provided by a smuggler, according to the Customs and Border Protection (CBP).

“During the incident, a 3-year-old girl fell off the smugglers’ ladder. Agents rendered aid to the child who sustained minor injuries,” it said.

YumaSector #USBP agents apprehended 49 individuals from Guatemala who illegally crossed an outdated section of 16-foot border wall yesterday. During the incident, a 3-year-old girl fell off the smugglers’ ladder. Agents rendered aid to the child who sustained minor injuries. pic.twitter.com/OHoCYEkmSR

The footage was released by the agency after being captured by surveillance cameras.

It shows the illegals climbing one-by-one up the ladder from the Mexican side of the wall before dropping into the United States using what appears to be a rope.

The final seconds of the footage shows two people running south from the Mexican side of the wall hauling what appears to be the ladder.

The footage came about a week after Border Patrol agents spotted a group of 118 illegal aliens scaling a wall using a ladder and a rope.

On Monday #CBP #YumaSector Border Patrol agents apprehended a group of 110+ Central Americans who illegally scaled the wall with the assistance of a smuggler with a ladder #NationalSecurity #SouthwestBorder pic.twitter.com/T19JzI3xeC

CBP officials said that all the illegal aliens were detained by agents.

Like the newer video, the final seconds focus on a figure scrambling away from the wall on the Mexican side carrying what appeared to be a ladder.

Jose Garibay, the Border Patrol’s Yuma Sector spokesman, said that the smuggler knew that he or she wouldn’t be pursued.

“It shows how brazen these smugglers are and the fact that they’re unafraid,” he told the Arizona Republic.

“They know that we’re not gonna go into Mexico to apprehend them. So once he puts up that ladder, gets his commodity—in which he looks at these humans—in the United States, then he takes down his ladder, and as you saw in the video, just walks back to wherever he hid the ladder and continues on with his day.”

“It’s presumable that this individual has done it more than once,” Garibay added.

The Jan. 21 breach happened just one mile from where 376 illegal aliens dug holes under the fence the week prior. The group was the largest group that CBP agents have ever encountered in the area.

Garibay said that the incident highlighted the need for improved barriers and noted that the Yuma Sector is scheduled to get at least 27 miles of upgraded barriers, which will measure 30 feet in height.

“Those saying that if we build a 30-foot wall, that you’ll build a 31-foot ladder, and it’s not true,” he said. “Because you’ll need two 31-foot ladders because you not only have to go up, but you have to come down on the other side. And as you saw, it is a long drop from 18 feet.”

President Donald Trump has repeatedly said the United States needs long spans of the border wall along the southern border, including upgraded barriers to replace some existing portions.

Trump said he wouldn’t sign appropriations for 25 percent of the federal government if it didn’t include $5 billion for the wall, leading to a partial government shutdown of over a month. Trump agreed on Jan. 25 to reopen the government temporarily and signed a bill that did so for three weeks.

He said he was doing so because Democrat leaders said they’d negotiate only if the government was open.

“21 days goes very quickly. Negotiations with Democrats will start immediately. Will not be easy to make a deal, both parties very dug in,” he said via Twitter after signing the bill.

“The case for National Security has been greatly enhanced by what has been happening at the Border and through dialogue. We will build the Wall!”