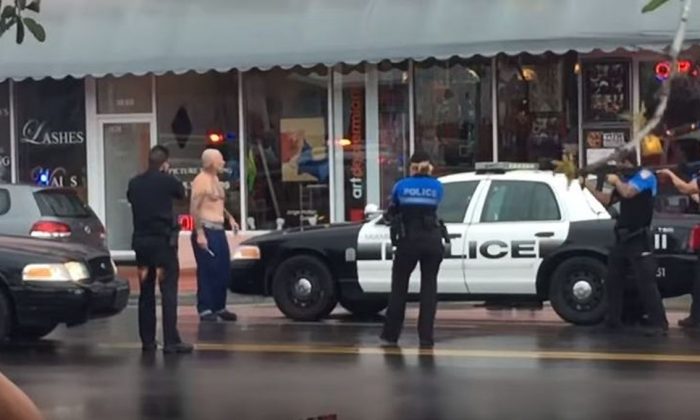 Bank robbery suspect said he had a bomb
By Jack Phillips

Police officials got a 911 call for a holdup alarm at a Bank of America. The caller said the suspect was armed with a bomb and passed a note to the teller, which was released by the FBI. He also said he would shoot a customer.

The suspect fled the bank and officers later encountered him entering a barber shop nearby.

“My understanding is that he did not get any proceeds; he left without the money,” Miami Beach police Chief Daniel Oates told NBC.

He refused to exit the barbershop before coming out with a straight razor. Officers fired shots at him and he was killed on the scene.

Police didn’t release the name of the suspect or the officer involved in the shooting. Video footage of the incident shows a shirtless man being confronted by several officers, and it was shared widely on Facebook. He takes few steps forward before the officer opens fire with a rifle. The footage is here (WARNING: It might be disturbing for some users):

Oates said the man raised a razor in his hand during the confrontation, prompting officers to shot him. “He was challenged by the officers in the street and at some point during that confrontation he did raise his hand with a straight-edge razor in it and he was shot,” he added.

Marcellus Johnson, who took the video and posted it on Instagram, said he was getting coffee when he saw the incident go down.

“I looked to my left and there was a guy inside of the barbershop … and he was banging on the window with a sharp object, maybe a knife or so,” Johnson told CNN. “The police were trying to get him to come outside of the establishment. He eventually came out.”