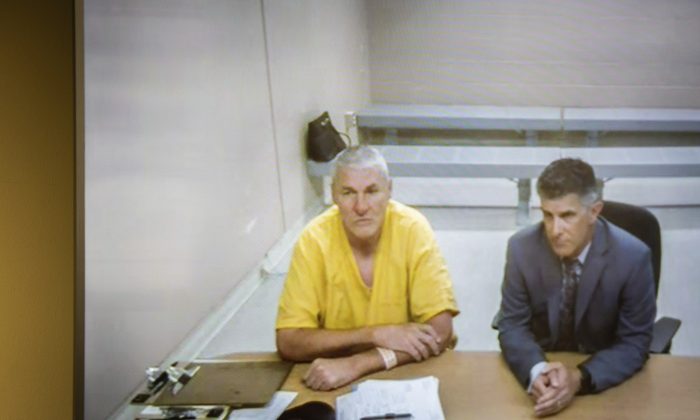 Video footage showing Mark Rypien’s wife crawling on the ground in pain after being hit by her husband has been published.

The footage, shot on June 30 in Spokane, Washington, was obtained and placed online by TMZ on July 13.

The video shows Danielle Rypien on her hands and knees, crawling from the vehicle to the sidewalk and then onto a grassy area, where she collapses.

Rypien issued a joint statement with her husband saying he didn’t commit any crime and she does not want him prosecuted, noting that she thinks he suffers from CTE, or chronic traumatic encephalopathy, from his long NFL career. Mark Rypien, 56, has also said he thinks he has the condition.

“Potential signs of CTE are problems with thinking and memory, personality changes, and behavioral changes including aggression and depression,” it added. “A definitive diagnosis of CTE can only be made after death, when an autopsy can reveal whether the known brain changes of CTE are present.”

“As a family we are deeply concerned about the situation,” the Rypiens wrote in a joint statement July 2. “Occurrences like this one are often chaotic scenes which are not conducive to revealing full clarity about what actually transpires.”

The arrest report, though, says that Mark Rypien admitted to police that he physically struck his wife after an argument took place, reported The Spokesman-Review on July 11.

He initially said his wife got the “wind knocked out of her” after he pushed her hands away from his face, which she had placed there to cover his vision while he was driving.

During the aftermath captured by the video footage, he allegedly told her to “tell the truth.”

After responding officer Todd Brownlee arrived, he asked Rypien, “Did you hit her?”

“Yes, I did,” the former football star replied.

Mark Rypien’s attorney, Chris Bugbee, told The Spokesman-Review that his client did hit his wife but that it was in self-defense.

“He shoved Danielle back into the passenger seat with his right arm and elbow hard enough to ensure that he would move her out of the way,” wrote Bugbee. “So when the officer informed Mark that a witness had seen a man strike Danielle in the car, he told the officer that he was the person. There is no doubt that he struck her when he moved her.”

Another domestic assault occurred in November 2017 when Mark Rypien “got angry” and threw his wife on a bed but Danielle Rypien was arrested because she misled officers, the couple later said. The charge was later dropped.

“I don’t regret it, per se, but I did not tell the police what happened,” she told The Spokesman-Review. “This was a fluke thing.”

Rypien appeared in court on the fourth-degree assault/domestic violence charges on July 1 and pleaded not guilty, reported KHQ.

Police said that a witness relayed that Danielle Rypien was complaining of stomach pains while on the ground next to the road, prompting them to call the police. However, Rypien told officers at the scene she did not want them to arrest her husband.

In court, Rypien said that he and his wife were having an argument and that he “only hit his wife to remove her hands from his face.”