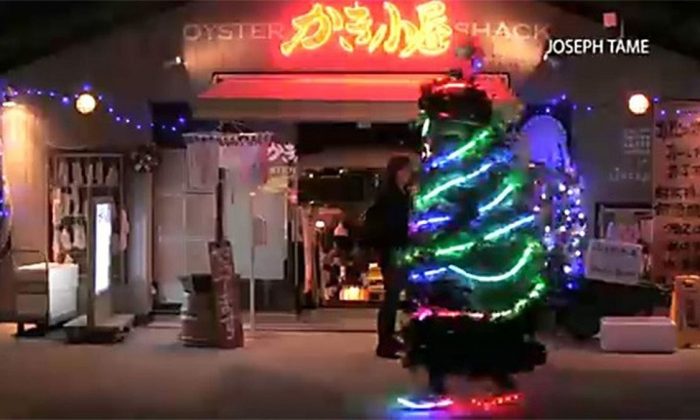 A video showing a British man running through the streets of Tokyo dressed as a Christmas tree has gone viral.

“There are many areas of the city that are beautifully illuminated with Christmas decorations, but there are also areas where there are not, so I thought wouldn’t it be great to take the fun and wonder of these illuminations into those areas and spread the Christmas cheer,” he told CNN of the video.

He added: “I like to make people laugh and smile where they don’t expect it.”

To make the tree, he used aluminum with two rucksacks. He then used pieces of two fake Christmas trees. To make it more interesting, he used 99 batteries, 1,500 LED lights, and 30 meters of wiring for the lights.

“The reaction here on the streets have been amazing,” Tame said.

“The reactions range from sudden burst of laughter to a couple of people have screamed in surprise and in delight,” he noted. “A lot of people just say ‘What? What? What are you doing?’ And I tell them I’m being a Christmas tree.”

“Even as I speak to you now there’s a crowd of people taking photos and everybody wants to take photos with me. One of the main things is to break the social barriers. Tokyo is a great city but people keep to themselves. It brings people to get together. On the train, it’s just wonderful. Everybody is just transfixed.”

On the YouTube video description, he describes it as “the latest revolutionary wearable device” developed by Tame, who calls himself an inventor.

“This mobile seasonal illumination device has been designed to disrupt the illumination industry by allowing for on-demand illumination – simply pull out your phone and summon the Christmas tree anytime, anywhere, and Joseph will head in your direction to bring some light into your life,” he said.