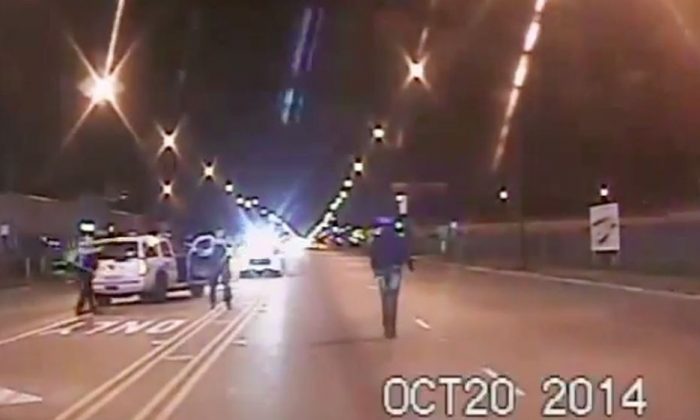 The Chicago Police Department released the video (the video can be seen below) showing the fatal shooting of Laquan McDonald on Tuesday evening.

The video shows McDonald walking in the street before shots were fired at him. The whole incident takes place in only a few seconds. An officer is then seen apparently kicking an object out of McDonald’s hands before medical personnel arrive on the scene. McDonald was apparently walking away from police, and he was armed with a knife. An autopsy confirmed that he was shot 16 times and had PCP in his system.

Attorneys said the video shows McDonald falling to the ground after he was shot several times. While he was on the ground, his body is seen moving around as more shots are fired, NBC Chicago reported.

Prosecutors said the video “clearly does not show McDonald advancing toward [Van Dyke].”

Chicago Police Supt. Garry McCarthy said of the officer who shot McDonald, “He’s going to have to account for his actions.”

“Anyone who is there to uphold the law cannot act like they are above the law,” Emanuel said, per DNAInfo.

McDonald was shot and killed on Oct. 20, 2014. The city paid a $5 million settlement to the family while Van Dyke was charged with first-degree murder.

“Throughout the course of our investigation I’ve seen the video on a number of occasions and I can tell you: It is everything that it has been described to be by the news accounts,” Cook County State’s Attorney Anita Alvarez stated on Tuesday.

“It is graphic, it is violent, it is chilling. … To watch a 17-year-old young man die in such a violent manner is deeply disturbing, and I have absolutely no doubt that this video will tear at the hearts of all Chicagoans.”

According to NBC Chicago, Emanuel and McCarthy called for calm ahead of the release of the video, apparently bracing for protests and public backlash.

“I believe this is a moment that can build bridges of understanding rather than become a barrier of misunderstanding,” Emanuel said.

The video can be seen here (WARNING: The video contains graphic content):

A judge ordered police to release the video by Nov. 25.