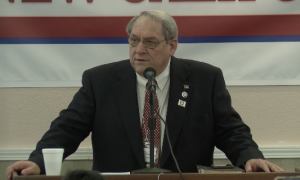 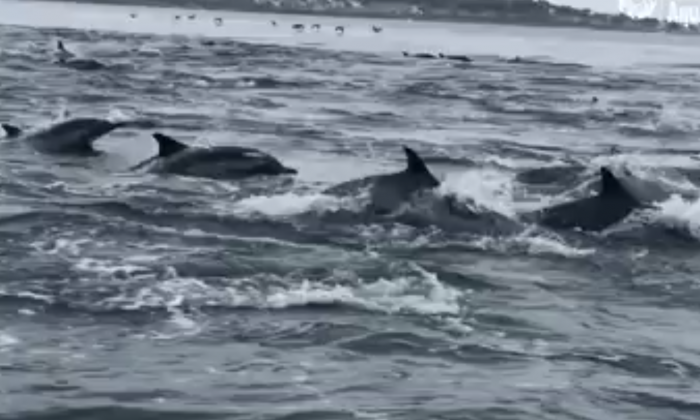 A super pod of dolphins, filmed chasing baitfish off of Cannery Row, California on Sept. 3, 2018 .(Monterey Bay Aquarium ‏ via Storyful)
US News

Video Shows Hundreds of Dolphins Stampeding Near Boat in California

A Southern California man captured video footage of a rare scene off the coast on July 14.

The video shows a large pod or dolphins, described as a “mega-pod,” near Laguna Beach in Orange County.

Chuck Patterson told the OC Register that he was on a 95-foot boat off the Laguna coast when the dolphins seemingly emerged out of nowhere at around 12:30 p.m. local time.

“They came out of nowhere,” he said. “They looked like they were going down the coast and kind of hooked up with us to go up the coast. We were by ourselves the whole time. It was really cool,” The Mercury News reported.

Patterson said he has seen similarly sized pods of dolphins near the Channel Islands. However, he never saw them swimming so closely and around both sides of a boat.

“Noooo way, they are going off! So sick!” he is heard saying in a video posted on Facebook.

A woman told the Register that she also spotted the pod, saying she was having a memorial service for her deceased father.

“We had just released him in a biodegradable sea turtle box,” Caryn Cobilo said. “About 30 seconds later this pod showed up surrounding where we had left his box. It was incredible. The box was floating, then as it absorbed water it sank. Then we set off and the dolphins appeared.”

The dolphins stayed with the boaters for about 25 minutes.

“They were pretty impressive how fast they were charging,” he said. “It’s amazing. It’s just something that tells you and shows you the ocean is alive and gives you a different respect of how beautiful nature is and we really need to preserve it more to see these magic moments. It’s super empowering. It was one of those feel-good moments. You could watch them for hours.”

The number of stranded dolphins across the Gulf Coast has jumped, tripling the number of deaths so far this year, a scientific agency warned on June 14.

The National Oceanic and Atmospheric Administration (NOAA) confirmed at least 279 dolphins were stranded across much of the Gulf of Mexico since the beginning of February. The figure represents triple the usual number and about 98 percent of them have died already.

Scientists are preparing to investigate whether the 2010 British Petroleum oil spill disaster, reduced salinity from freshwater flowing from high rivers to the gulf, and a Louisiana spillway helped cause the deaths.

“We do know some of the health conditions … are improving but some have been slow to improve,” NOAA Fisheries’ Marine Mammal Health and Stranding Response Program Coordinator Teri Rowles told The Associated Press. “Reproduction in the heaviest-oiled areas continues below normal.”

The Associated Press and Epoch Times reporter Richard Szabo contributed to this report.